Airpes Americas to Appear at AIST, ASME and Other 2020 Events

Airpes, a manufacturer of lifting, weighing and below-the-hook equipment, will deliver its expertise to two high profile industry meetings in the first half of 2020.

At both events, Tad Dunville, general manager, Airpes Americas, will be joined be his father and industry stalwart, Larry Dunville, principle of Overhead Crane Consulting.

First, the pair will contribute to discussions surrounding the crane-related B30 Standards Committee, when the American Society of Mechanical Engineers (ASME) sits in New Orleans, on January 26-30, before they address the Association for Iron & Steel Technology’s (AIST) 27th Crane Symposium, in Pittsburgh, on 7-9 June.

“The two events will be very different,” said Tad Dunville. “The ASME group will mostly be engineering professionals from crane companies, while the AIST delegation will be employees of [steel] mill crane owners. Further, our role at ASME will be to contribute to roundtable discussions related to iteration to the rules in B30.2, while at AIST we will prepare a presentation and address an audience.”

The company has been in the U.S. market for over 10 years, but Dunville, who was chief financial officer at his father’s old company, Dearborn Crane & Engineering, stepped into his current leadership role earlier this year.

He continued: “My father has been active with a B30 committee for about a year now; this is my debut first-hand experience with these dealings. We expect to be engaged in conversations about new or updated items related to B30.2—the standard for overhead crane construction and service. This is known as a consensus standard and one version of it is referenced by law in OSHA 1910.179, which makes it federal law. Owners and manufacturers of overhead cranes in the U.S. take it very seriously. Consensus standards can also be used to cite general duty clause violations even if they do not directly apply to the situation at hand if an injury or death occurs and was caused by a violation of the consensus standard.”

For AIST, meanwhile, Dunville has co-authored a presentation written specifically for owners of mill cranes. He said: “When discussing crane safety, inspection, and maintenance, the audience is very different between 5-ton capacity package hoist owners and those who own process cranes or mill cranes. If a process crane goes down, it could result in hundreds of thousands of dollars in lost productivity or even death. The focus is not on ‘how much does it cost to repair?’; the focus is on ‘how much does it cost to be down?’. A $1,200 part might be a deal-breaker on a ‘stick crane’ repair, but neglecting a part of similar value on a mill crane is a good way to get fired or kill someone.”

Dunville knows the landscape. He has been a repeat presenter alongside his father at AIST events; between them they boast over 70 years of electric overhead traveling (EOT) crane experience. “The audience at AIST,” he continued, “Really appreciate the non-biased, non-sales talks, and we try very hard to keep our content strictly to actionable concepts that [AIST] members can take home, think about, and act on at work the next day. No ‘next year’s budget’ stuff or big price tag ideas, just information that will keep people safe and productive. That’s just as important for the crane company guys as the mill guys; we all want to go home and see our family or friends. I grew up around a shop where a few guys were missing fingers or had scars, and I remember when a guy didn’t make it home. It really left an impression on me.”

The Airpes operation is astute in aligning itself with Dunville Sr., as his son explained: “I admire my dad; he’s one of those ‘can’t sit still’ guys. About a year into retirement, people started asking him for a second set of eyes on sticky EOT crane problems, and he received calls for expert witness testimony on crane accidents nationwide—and he really enjoys it. Institutional knowledge counts for lots in this business. We talk many times per week and discuss various issues we run across in our own firms. It benefits our customers and certainly the audience members at our presentations.”

Beyond ASME and AIST, Airpes will also have a presence at Material Handling Industry’s (MHI) MODEX show in Atlanta, on 9-12 March and the same organizer’s spring meetings in Charlotte, on 26-29 April. The Offshore Technology Conference (OTC) follows in Houston, on 4-7 May. The centerpiece, however, remains the AIST Crane Symposium, which takes place at the Omni William Penn Hotel, Pittsburgh, Pennsylvania. 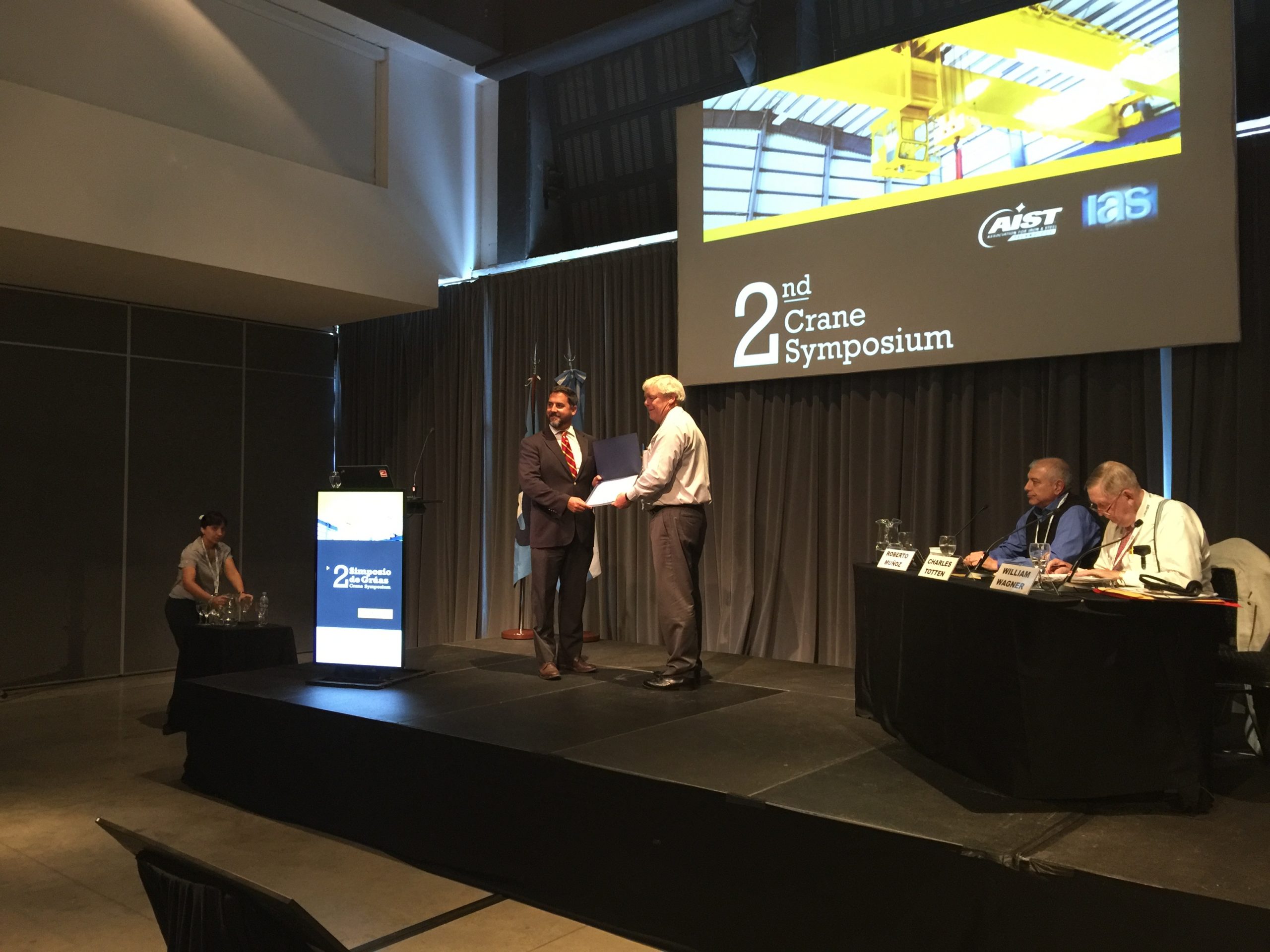 Caption: Tad Dunville (on stage, far left), general manager, Airpes Americas gave a speech on crane safety and load testing at the AIST Crane Symposium in Argentina in the fall of 2017. Pictured with Dunville is Bill Wagner, of ArcelorMittal Burns Harbor crane department.