Certex UK offers a full solution for lifting products and services within the industrial, offshore and renewables markets. We are one of Europe’s leading suppliers of lifting products, specialising in steel wire rope, lifting equipment, engineering services and technical guidance. Certex UK belongs to the business unit Lifting Solutions with Axel Johnson International, today the group consists of 22 market leading companies with 91 service centres throughout Europe.

Doncaster based, Certex UK has partnered with its sister company Mennens (Amsterdam Branch) to win a major construction project contract on the Hollandse Kust Noord (HKN) Windfarm, off the coast of the Netherlands, likely to run until September 2023.

HKN CrossWind, a joint venture between Shell and Eneco, is located approx. 11.5 miles off the west coast of the Netherlands near Egmond aan Zee. CrossWind plans to have HKN operational in 2023 with an installed capacity of 759 MW, generating at least 3.3 TWh per year. CrossWind will install 69 wind turbines, each with a capacity of 11 MW, the majority of which will be situated over 1km from each other.

This contract follows Certex UK’s and Mennens successful ongoing delivery of services to HKZ, the farm’s southern counterpart. The company has a long history with the region, having worked on Borselle 1 & 2, Fryslân, and Westermeerwind wind projects. On HKN, it will provide four personnel working in rotation, both onshore during load-out and offshore during commissioning.

Terry Hoenes, Divisional Manager—Renewables, at Certex UK, said: “We have a strong history with Siemens Gamesa for windfarm construction projects and are a trusted, proven partner. With our recently awarded ISO [17020] accreditation, our customers have added assurance of quality. A 69-turbine windfarm is average in terms of volume, but as turbines modernise and grow in size and efficiency, the megawatt output is significantly increased. Our first phase two construction project in the UK was for 175 turbines, yet this does not have the installed capacity of HKN.”

The Dutch government originally determined that HKN may have a maximum of 100 wind turbines with a maximum tip height of 251m above sea level and a minimum capacity of 6 MW. By opting for larger turbines, less need to be installed. This increases the efficiency of the wind farm and limits the costs and effects on nature.

Given the geography of the project, Certex UK will partner with sister company Mennens, also part of the Lifting Solutions Group, one of six divisions within the Axel Johnson International business. Certex provides products and services to various stakeholders within the wind energy sector, including companies that manage either the installation of new wind farms, or the service and maintenance of existing sites.

The Lifting Solutions Group consists of 22 companies with over 100 locations in 19 countries, with the renewable energy sector largely being served to date from the UK and Denmark. However, a newly launched global renewables division incorporates additional companies in Holland, Germany, Spain, Poland, France, Taiwan, China, and the United States.

Hoenes added: “This could lead to other work once the [HKN] windfarm becomes operational, either via service or balance of plant [BoP] contracts. We have ambitions to be the preferred global partner delivering a consistent service offering wherever the windfarm is located. Our new technical training facilities are under development so we can centralise our competence management and guarantee quality personnel worldwide.”

First power at HKN is expected by the end of 2023. 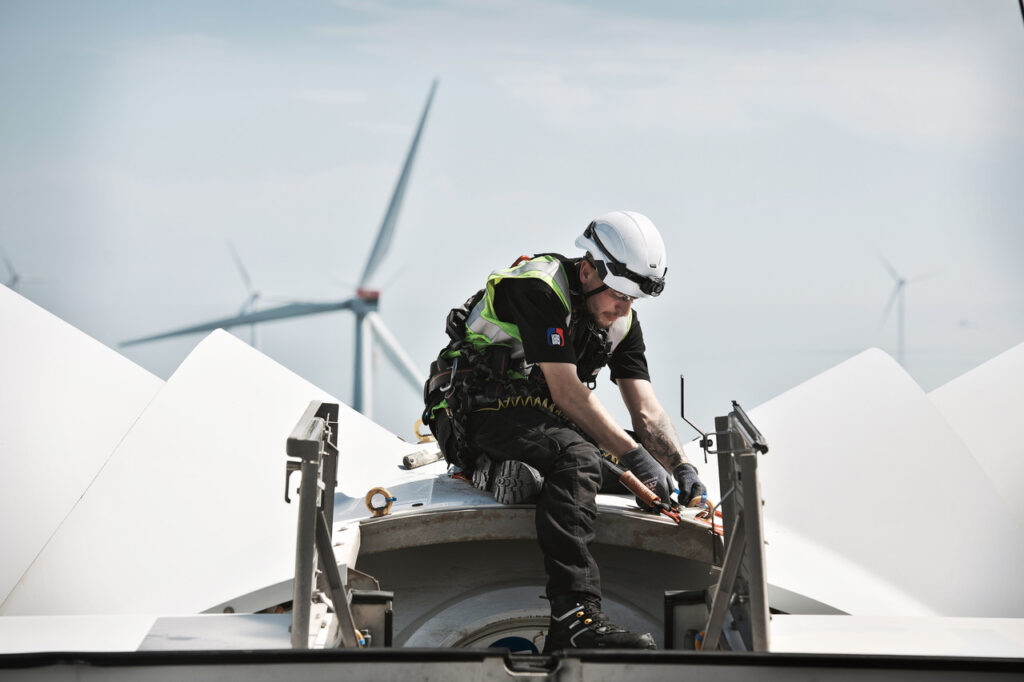 Caption: Certex UK will assist with the provision of turbine compliance services to Siemens Gamesa, including turbine-mounted safety equipment.