The Crosby Group is a global leader in the innovation, manufacturing, and distribution of products and services used to make lifting and load securement safer and more efficient, with premier brands such as Crosby, Gunnebo Industries, Crosby Straightpoint, Acco, McKissick, Crosby Feubo, Trawlex, Lebus, and CrosbyIP.

The Crosby Group’s Cor de Kruijf changed the way lifting clamps are used forever—but it was a team effort, he insists.

Cor de Kruijf, aka Mr. IP, recently retired after more than four decades in the industry, the majority of which was spent at The Crosby Group. His legacy is secured after a lifetime of devotion to the evolution and innovation of lifting clamps.

“I’m happy in retirement and can reflect on a job well done,” de Kruijf beams on a rainy, winter’s day in Utrecht, Holland. “I was always conscious, especially in the later years of my career, that the company, and industry, must go on without me so I spent as much time as possible passing knowledge onto the next generation.”

He had a good mentor who taught him the value of sharing information for continued improvement of product engineering and best practices. Martinus B. van de Wetering was the owner of Driebergen-based Inter Product B.V. (IP), where de Kruijf started in the drawing room as a mechanical engineer, back in the mid-1970s. Prior to that, he had left Stork, now a Fluor company, still headquartered in Utrecht.

When de Kruijf joined, Inter Product was a company of only 50 people, who dealt with everything including purchasing, engineering, manufacturing, marketing, and sales. It was eventually bought by The Crosby Group, now a global leader in lifting, rigging, and load securement hardware. It gave the business access to resources it didn’t have before, built on the foundations that van de Wetering had laid over many years.

“Martinus was my teacher,” de Kruijf says. “I learnt most things I know from him. At the time, there was no documented knowledge or means to study lifting clamps. Most things you learnt were in practice and the progression of the product sector was reliant on people like Martinus to be creative and see the solution through the lifting problem. This isn’t something you can learn in school. That being the case, I started to understand that we were largely responsible for taking our industry forward.”

And take it forward he did. He’s now better known as Mr. IP, after all.

“To be called Mr. IP is flattering but it’s always been a team effort,” de Kruijf says.

Maybe so, but Kees Gillesse, product development engineer at The Crosby Group, says that 75% of the product in the current lifting clamps catalog has been at least in part designed by de Kruijf. You don’t get a nickname after a company for nothing, Gillesse concurs.

Going up in the world

CrosbyIP-branded clamps are The Crosby Group’s range of vertical lifting clamps, but the catalog has expanded to include hundreds of others, including IPU (universal; any direction), IPH (horizontal), and so on.

One that stands out for de Kruijf is his first—the IPPE clamp, for lifting and transporting non-bendable sheet mental in a horizontal position. The jaw opening can be easily adjusted for the height of the bundle or plate. Magnets in the foot-plate allow one person to operate multiple clamps simultaneously.

“When I started developing lifting clamps,” he recalls, “All calculations were done with an arithmetic ruler and the drawings drafted with a pencil. When the dimensions were good, I would put them in ink. Later came the calculator, before drawings were made by computer; we all know about today’s computer-aided design [CAD] capability. Modern technology enables us to develop different working load limits of the same model clamp much easier.”

The IPGNS, however, is de Kruijf’s favourite clamp—a non-marring product up to 6t capacity, now available with either steel or stainless steel clamping plates, allowing the clamp to be used in wet conditions.

“It isn’t necessarily the most standout clamp on its own,” he says, “But it went on to inspire many other clamps and its features are seen in multiple models. Today’s range of vertical, horizontal, and pipe lifting clamps, for example, offer a myriad of features specifically designed for the demands of wind energy applications. A standout feature of CrosbyIP-branded standard and bespoke clamps is a non-marring camsegment.”

When handling steel plates with lifting clamps, the clamping camsegment and pivot usually leave an indentation in the material surface—known as marring. Because of the high standards in the wind energy industry, these indentations must be ground away from the surface. This rework costs time and money. By reducing the height of the teeth of the camsegment and pivot, the pitch between the teeth can be decreased and more teeth can be in contact with the material surface, reducing the depth of the indentations.

The last lifting clamp that de Kruijf worked on from start to finish was the IPTKA universal beam clamp, for hoisting, pulling, and positioning beams. It can be used as a temporary tackle point in side-loading applications. In fact, de Kruijf says, it boasts side-loading capacity at 100% of the working load limit up to a 90-degree lifting angle. It is easy to close and open with a hinged body with self-locking device and available with a multi-purpose hoisting eye for tightening and hoisting.

Whether it be the IPPE, IPGNS, IPTKA, or another clamp altogether, “The user always drives the innovation,” de Kruijf says. “I used to interact one-on-one with the person who encountered the lifting or material handling problem. These days, channel partners also play an integral role as we look at the end-use application collectively and, if necessary, adapt one of the hundreds of clamps that we have already designed. But the principle is the same.”

CrosbyIP is renowned for the manufacture of special clamps where there might be a requirement beyond the capabilities of the standard range. A recent example of custom manufacturing is the 22.5t capacity special universal vertical clamp (model IPU10X3). The clamp, which was designed for a German wind energy manufacturer, features an extra-wide camsegment and three pivots for less surface pressure to further reduce indentations.

The 70t capacity pipe hook (model IPPH) has been designed for 5,700mm to 7,000mm diameter pipe, up to a thickness of 100mm. It features soft steel replaceable inserts and is equipped with 40t capacity G-2140 shackles. With both the universal horizontal clamp and pipe hook, other capacities and jaw-openings are available on request.

“The extent to which a product becomes standard or remains a one-off customization, really depends on the application and the market,” de Kruijf says. “In shipbuilding, there are many repeated applications that are the same from one site to the next, so it is very likely that lifting clamps designed for their use will be ubiquitous. In a small-scale steel yard, meanwhile, a problem might be more unique. Then there are those scenarios where a bespoke clamp evolves much later into a more standard model.”

Even today, de Kruijf’s influence can be seen wherever a lifting clamp is operated at the point of use. He often thinks of that when he is keeping busy during volunteer work around Utrecht, or even whizzing around the corners of his local speed-skating track. He is also a keen cyclist, devoted husband, and grandfather. 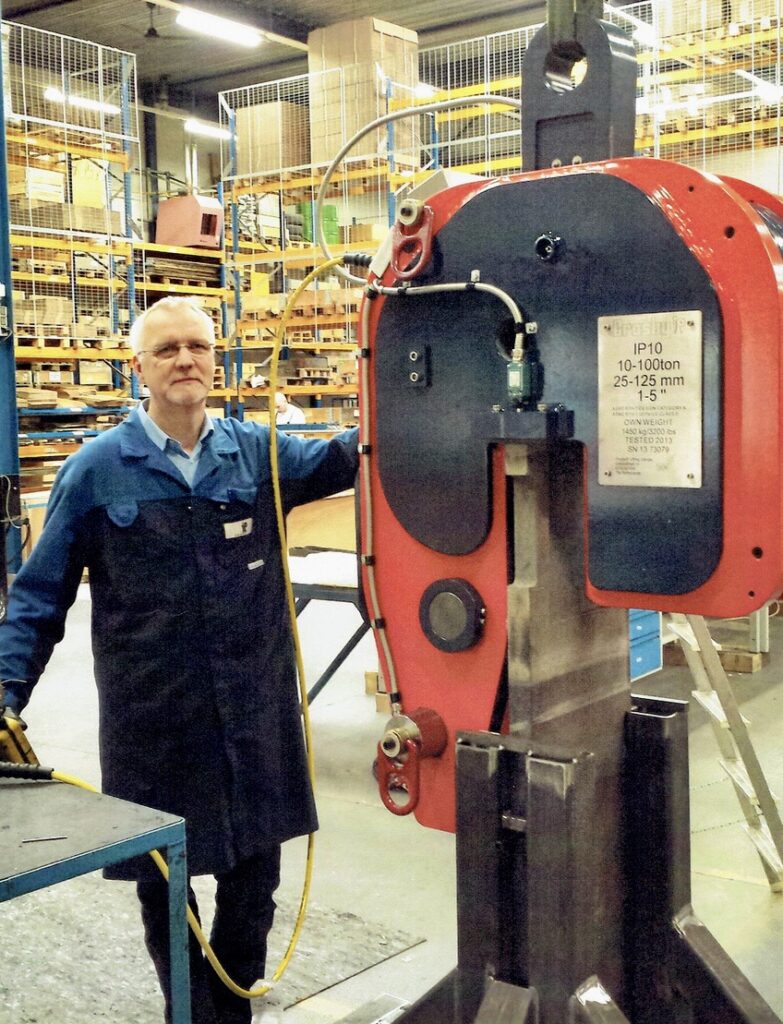 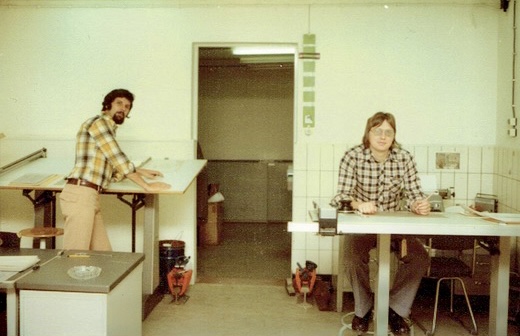 Caption: Cor de Kruijf started in the drawing room as a mechanical engineer, back in the mid-1970s. This photo was taken in 1978. 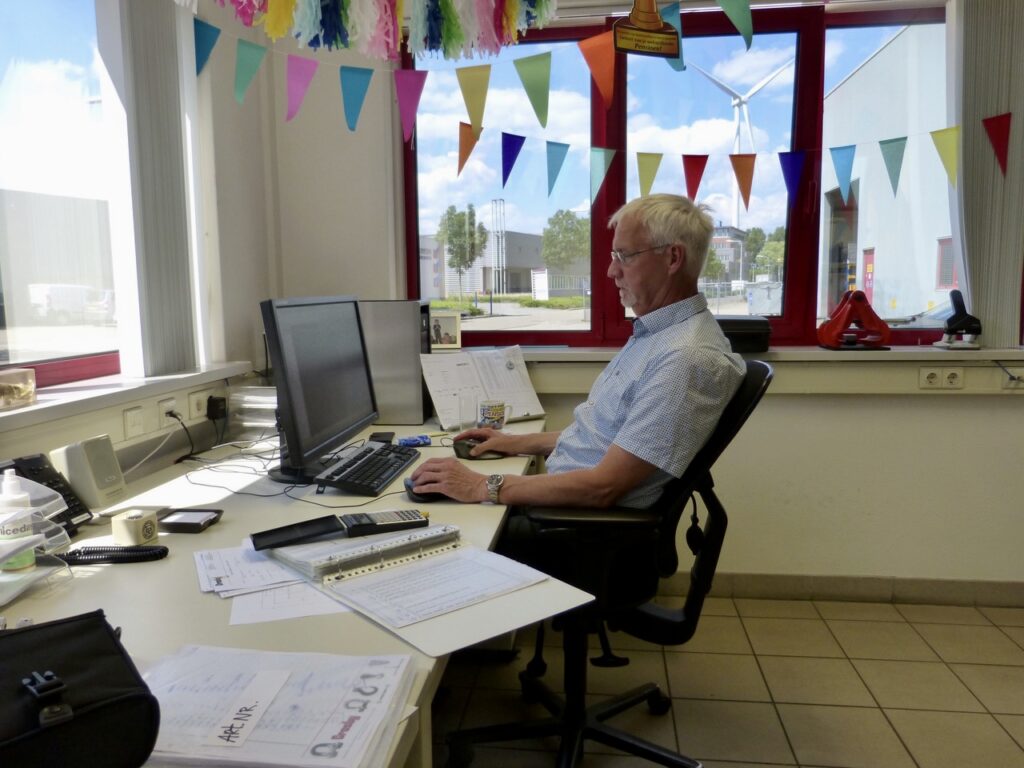 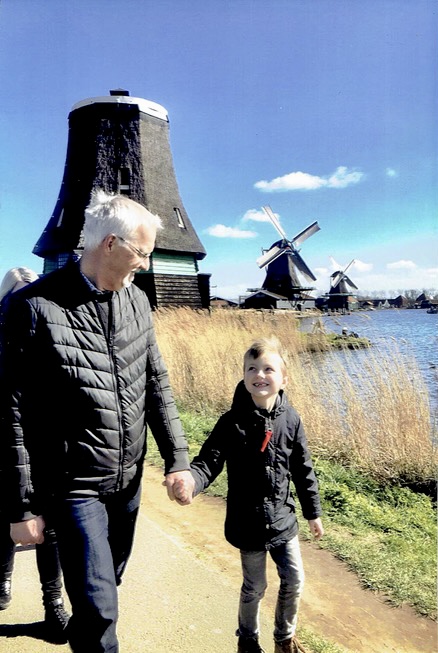 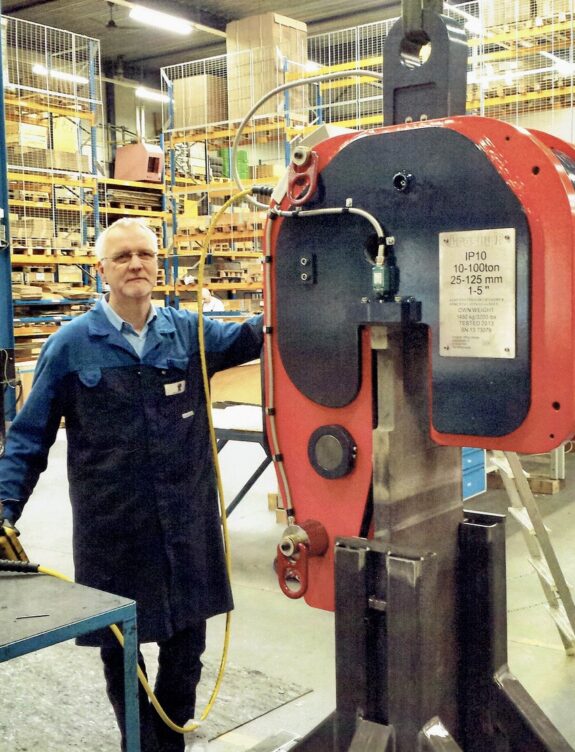 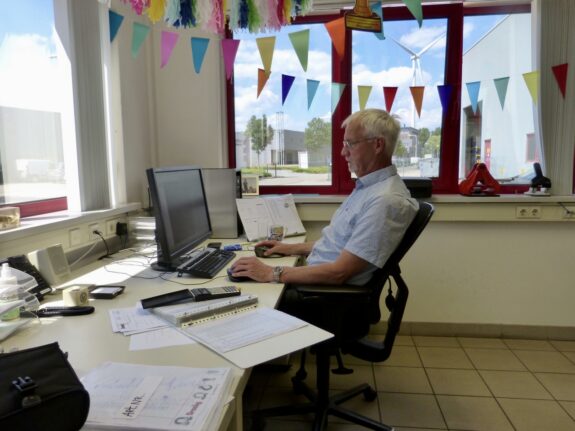