A non-profit organisation that works with rural communities in Kenya is using a 25t capacity compression load cell, donated by Straightpoint (SP), to construct footbridges and river crossings.

The load cell, which was provided with a wired Handheld plus unit to capture data, is being used by Bridging the Gap Africa to confirm capacities of helical piles, a key component of bridge foundations. The piles protect structures and reduce the risk of them being compromised due to undermining of the abutments during high river flow events.

Matthew Bowser, country manager Kenya at Bridging the Gap Africa, said: “We are currently in the product development phase for our helical piles and are trying several different variations of the piles to see what design provides an optimum combination for performance and ease of fabrication / installation. The load cell is key at this stage as it is enabling us to verify capacities of the different variation of helical piles.”

Over a period of 20 years, the charity has installed 63 bridges, but it has only recently moved to technological force measurement. Bowser said: “Testing the piles allows the design to be optimised by determining the actual capacities as opposed to using conservative design values from standardised tables. In a recent test of three helical piles, the centre one was tested for compression while the two outside piles acted as tension members and provided support for a jacking beam. The hydraulic jack and the load cell were used to apply and measure the load respectively.”

Phil Roch, marketing executive at SP, said: “The [load cell] donation is symptomatic of the empathic and caring ethos within SP’s company culture. Further, it goes to show the diversity of our range. SP load cells are currently being used within 14 major industries, with more being defined continuously. Even within those markets there are a myriad of intrinsically important stages that require load monitoring technology to ensure a safe and successful operation.”

Bridging the Gap Africa uses Kenyan skilled labour in a small town called Kitale to pre-fabricate components for the bridges such as towers, suspenders, and anchor connections. It then transports everything to site and hires the local community for installation and assembly. The charity builds suspended and suspension bridges, both of which are cable-supported structures. Wire rope cables are seated on steel towers and terminated at reinforced concrete anchors. Reinforced concrete foundations support the towers; the helical piles will be used to provide deep foundations.

Bowser added: “The load cell is brilliant. It is easy to use and extremely reliable. We would recommend this product to anyone that needs to know the load.” 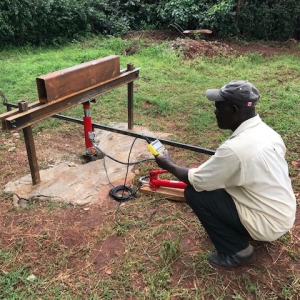