TLS, a Hibino USA company, won two separate contracts to provide the rigging equipment and a traveling head rigger for the two-month-long Worship Night In America and Holy Roar Tours, which took place during the spring months of 2018 and 2019 respectively. The 2018 tour included 24 shows, while this year’s circuit ended with an iconic 28th show, the Good Friday Concert, which took place at Bridgestone Arena in Nashville, Tennessee. Jordan Yeo, production rigger / production manager at TLS, traveled with both tours.

TLS, a distributor of R&M Materials Handling Inc.’s Stagemaker entertainment range of hoists, reported to two production managers and a tour manager over two years to deliver all of the lifting equipment, steel, shackles and controls, plus a rigging workbox that stocked tools for day-to-day use on the road. Yeo himself was responsible for marking the floor and leading the local crew in rigging the shows safely.

Yeo said: “It was a different lighting rig for both tours and each venue is different. Not all venues can hold the same amount of weight and have varying beam layouts. I took each venue’s information and put our show into their building. Sometimes we had to move things around to accommodate venue-specific challenges. Each show had its own rigging plot slightly modified to each specific venue. There were times that certain elements of the show did not hang due to the size of venue.”

Over 100 hoists were used in total—57 this year, 56 last—the majority of which were Stagemakers, ranging from ¼ to 2-ton capacity. Yeo highlighted the fact that all of the hoists ran at 16 ft. per min, while the length of the chains was typically 60 ft. or 80 ft. There were varying trim heights for the rig; the lowest was 16 ft. and the audio hangs usually trimmed to 60 ft. The lighting trusses’ maximum trim was 45 ft., Yeo added. Lighting trusses usually had three or four hoists moving at once and the audio main hangs had three hoists working together. The side hangs, meanwhile, had two pick-points that worked in tandem.

Stagemaker entertainment motors are designed to handle stage and theatrical equipment, enabling the safe and accurate position of speakers, lighting systems, stage sets, and sceneries. The range is lightweight, making it ideal for touring events, reducing time and improving ergonomics for riggers. Its compact size permits it to fit inside truss structures, and its quietness makes it ideal for operation during performances.

Yeo recalled the hectic schedule: “We usually chalked the floor around 8 a.m. Load-in started at 9 a.m. and we were finished with the rig up in the air between 12-1 p.m. each day. Sound check took between 2-3 p.m. Doors opened at 6 p.m. and typically the show started around 7 p.m. After performances, we were packed up and ready to move to the next venue in two-and-a-half hours.”

The latest tour is memorable because of the scale of the pre-rig for Tomlin’s final show at Bridgestone Arena.

Pre-rigging is when the tour rigger and local riggers go in earlier than the rest of the equipment and tour personnel to hang all of the motors. Sometimes this is done a day before or a few hours in advance of the main load-in. In this case, the team chose to pre-rig due to time restraints in getting the show loaded with added elements that hadn’t been on the tour previously.

Yeo said: “We added about 20 additional hoists to the Good Friday show due to the performance being almost 100% in the round. There were extra lighting trusses, video walls, and audio hangs to accommodate the seats to the sides that wrapped around the stage. The previous show was in Kansas City and I flew from there to Nashville early to be in time for the pre-rig, starting our day at 6 a.m. The timing with the driving distance was the main reason why the tour crew and gear did not show up until 11 a.m. We had 70% of the rigging done by the time the rest of the team arrived.” 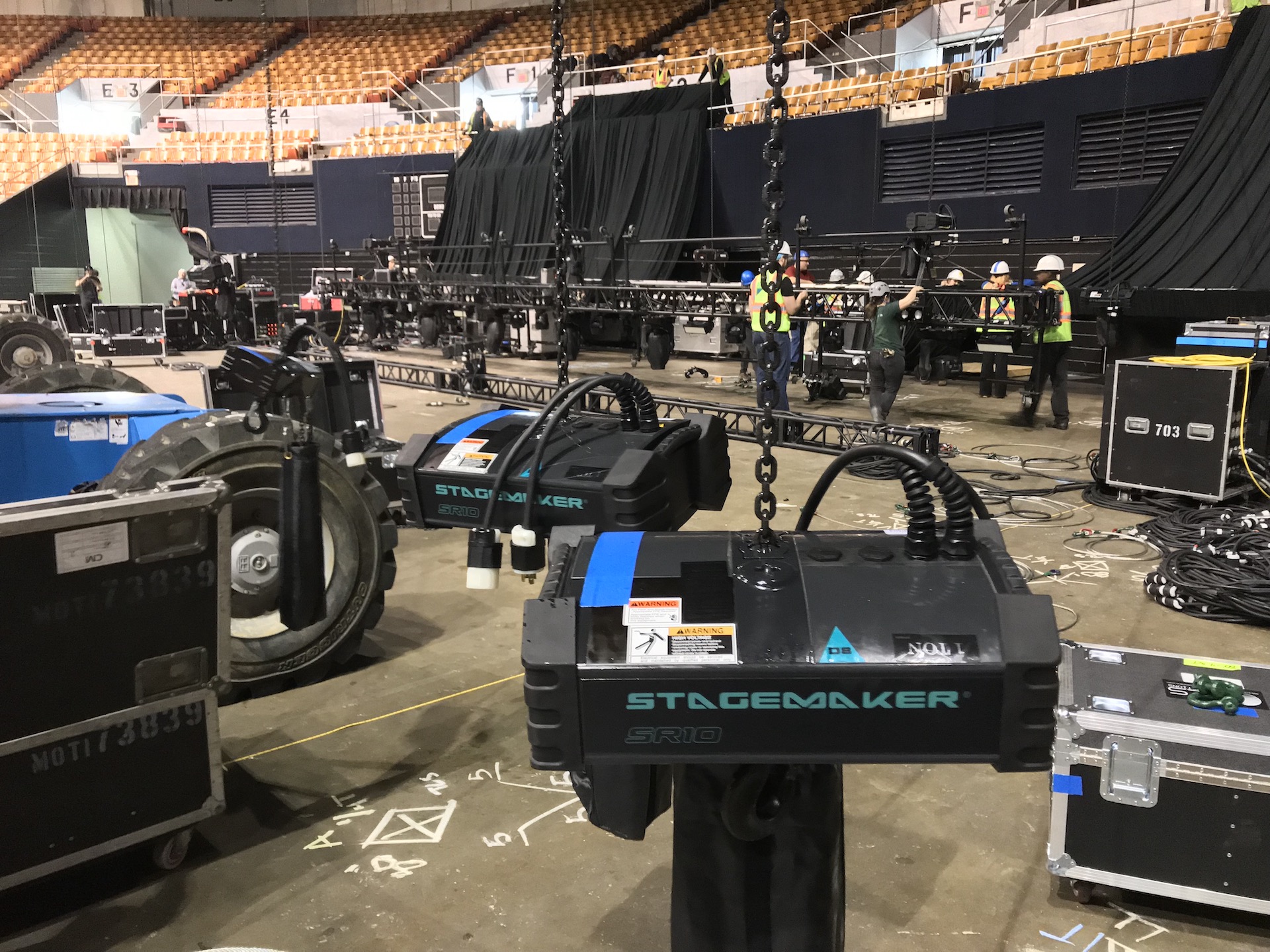 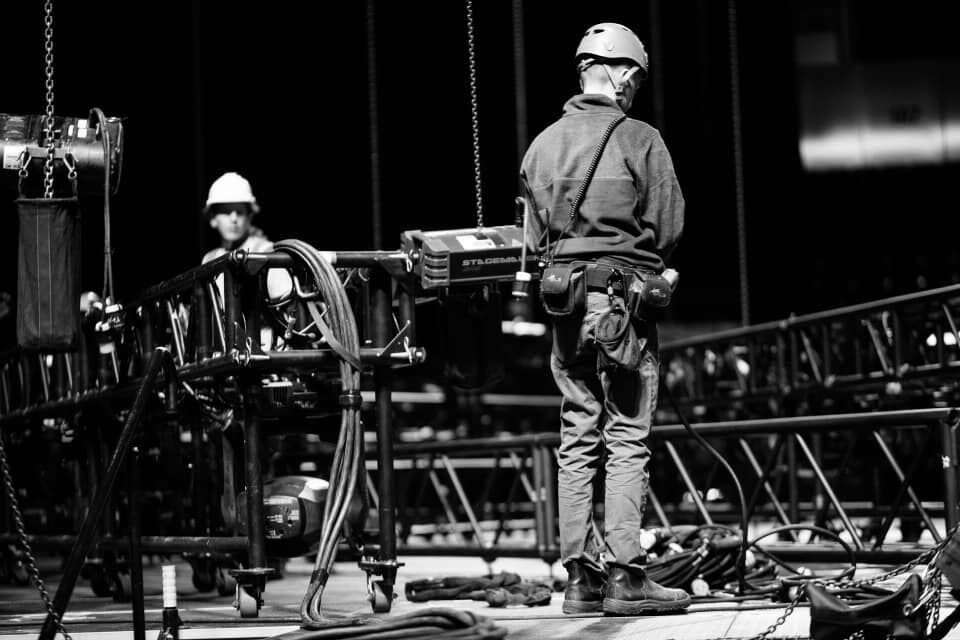 Caption: TLS delivered all of the lifting equipment, steel, shackles and controls, plus a rigging workbox that stocked tools for day-to-day use on the road. 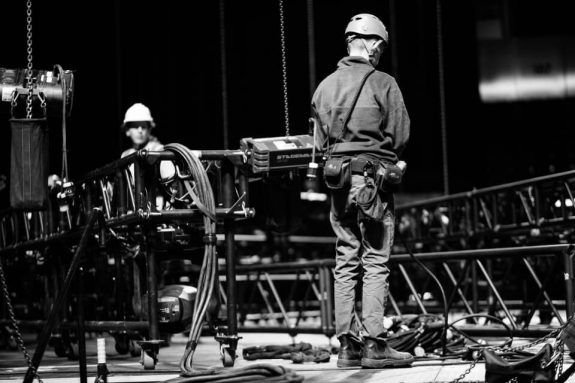 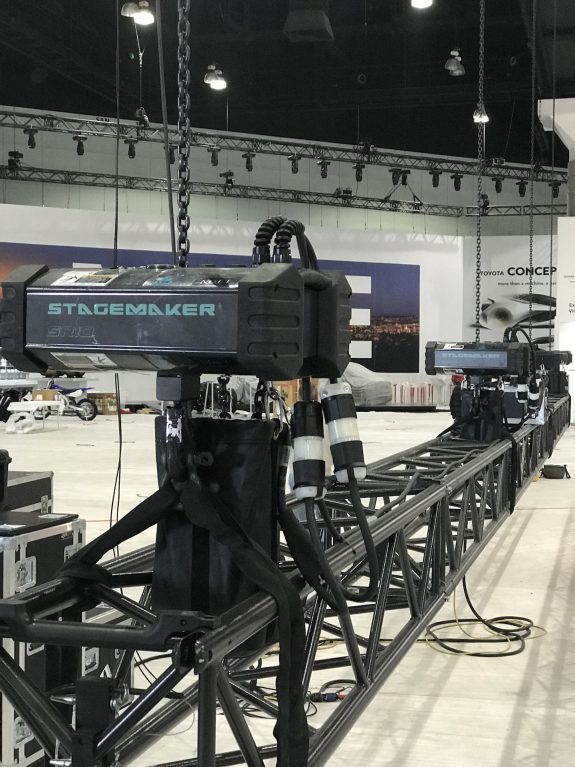 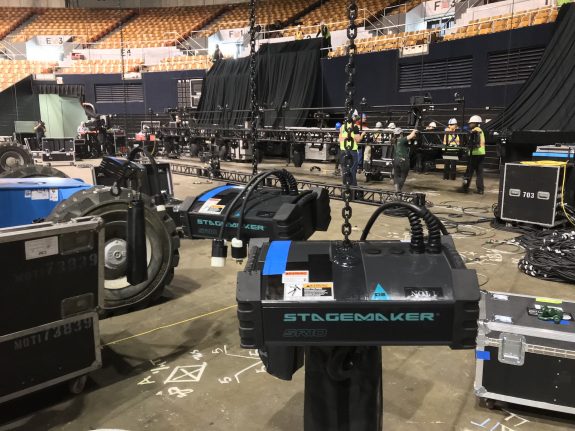