Trade Shows: Taking to the Stage

Trade Shows: Taking to the Stage

This is the second part in a series of blogs about trade shows, again targeted at exhibitors.

As I said in my previous post, trade show vendors should break their strategy into two clear areas—how to make the best of the time on the stand (or booth) and things one can (and should) do off it. I call this the ‘On Stage’ and ‘Backstage’ strategy.

If you read the first blog, you’ll already have the tools required to make your Backstage list. If you haven’t, you can go back to it or start from the On Stage guidance here. It doesn’t really matter and if you’re about to exhibit at a show, this is the place to learn how to get the most from your exhibition experience.

As I alluded to in my last blog, once you’ve committed to exhibiting at a show and have all your graphics and products in place, choose your event team carefully. Only put smart, polite, engaged, enthusiastic, knowledgeable staff on a trade show exhibit.

It was Basil Fawlty, the proprietor of Fawlty Towers, who placed an advertisement for his hotel’s gourmet night pleading for “no riff-raff.”

Sybil, his wife, was suitably aghast that he’d included such a statement in the ad. But I had some sympathy with Basil, who had considered what his end product would look like in his mind and set about realising it. As business owners, we all know how important that clarity of vision is. Without a goal, how can we achieve one?

Ok, Basil didn’t go about it in a great way and I’m certainly not suggesting you put “No riff-raff” in the subject line of your email when inviting staff to represent your business at a trade show. But you do need to consider the image and skill sets of the personnel you choose.

I was thinking about this as I walked the aisles of an entertainment equipment fair recently, where exhibitors largely represented providers of lights, sets, audio, visual, rigging and other technologies that go into creating the modern day theatre production or live event. Imagine what goes on behind the curtain to make Peter Pan fly, for example.

Any exhibition stand is like a mini stage, whether it’s a sprawling, outdoor, international event or a local business-to-business get-together in the belly of a roadside hotel. They vary in shape and size but the objective is to perform to the audience (visitors) in the hope that they react positively to what they see and hear. Trouble is, few businesses select their stand staff as though they were casting for a performance. Really, that’s exactly what they should be doing.

Consider how short the window of opportunity is for an exhibitor to engage with someone walking the aisles of a show. A stand is only in sight for a short moment and often there are distractions in the aisles and to the visitor’s right and left. Furthermore, they might be scanning a map of the event or planning their route to the next coffee break (the next blog in the series will help visitors win such battles). Exhibitors have got to take their opportunity to catch a visitor’s eye and draw them onto their exhibit.

It takes all sorts to do this, just like there are many different characters in a good play or performance. One doesn’t have to be loud and forceful to be successful, as many mistakenly think. Consider how such an approach appears to an introverted engineer, for example. His or her money is worth just as much to the company but an obnoxious salesman suggesting this is their lucky day could repel them. In your team of, say, five, strike a balance: 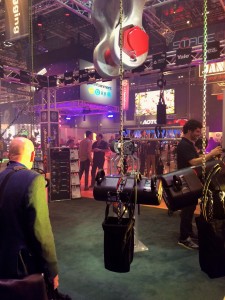 Ok, in reality, unless it’s the company’s one big trade fair and it comes around every three years, staff are not going to be encouraged to take time away from the grindstone to practice their performance, as such. Most likely, they’ll be expected to make the transition from desk to trade show floor overnight. But those managing the team should conduct something of a movement rehearsal and get John, Jane, Paolo, Anne and Sanjeev together to plan how they’re going to impart their own skills and personalities onto visitors and promote the company and its services in a positive light.

This is the time to discuss dress codes or company polo shirts (and decide not to wear clothes plastered in the company logo!). Also make a plan for capturing business cards and leads. And, no, a fishbowl isn’t an option because of the dead leads you’ll get, especially if your business has a niche audience. Perhaps a form with nature of enquiry and follow-up points would be good. There are fancy systems to do this kind of thing electronically now.

Remind staff to make eye contact with visitors as they walk the aisles, smile and offer a pleasantry. If they’re clever, they will catch the badge of a visitor (many shows insist on visitors wearing them) from a distance and call them by name. Cut to the chase but don’t overdo it. It’s important to understand what folks in the aisles do and how an exhibitor might be able to help them. A one-man band isn’t going to need a dancing truss system with multiple load cells, so let him move on to the tambourine stand. 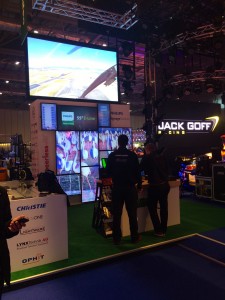 Work together. When Jane detects interest in a product, invite John to elaborate before introducing Paolo and Sanjeev. Match a visitor’s role in a company to that of a member of the stand team so they can find common ground. The introverted engineer I referenced earlier probably isn’t going to appreciate a Sanjeev and Jane double act but may have plenty in common with Peter.

We’ve all booed Jafar when he comes onto the stage during Aladdin but I wouldn’t reserve such treatment for the pantomime season. Pin a list on the wall of the cupboard at the back of the stand with some rules not to break under any circumstances. There are three key faux pas to include. Breaking them warrants a “Boo, hiss!” and a period of reflection off the stand to consider the damage done to the company’s reputation. I’m being serious.

Don’t take calls or use laptops

As a trade show team manager, allow your staff to leave the stand to make and take occasional calls so they’re not tempted to do so on the stand. It diverts attention and gives the impression to visitors that they are uninterested. Delegate someone to take pictures and manage social media. Maybe Anne prioritises this work and only deals with visitors if the team is stretched. Remember the #TheBigShow community you’ve built with @OldFriend @NewFriend and @ProspectiveClient after reading my earlier blog?

Again, the team should be encouraged to take regular refreshment breaks but not consume food or liquid on the stand. Insist that beverages are consumed out of sight. It’s different if you have a hospitality area for clients to sit and draw breath during their rounds but there are ways of staging this activity. Imagine being a visitor who offers to shake your hand and it’s covered in sandwich filling and your mouth is full of partially chewed bacon.

Never ignore someone who walks onto the stand

It’s hard enough to get someone into the vicinity of the stand and tougher still to generate a lead. If a visitor approaches a stand and starts thumbing literature, there’s a good chance they’re interested in what you do. Ask them how their day is going and what business they’re in, at least. 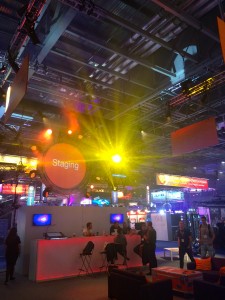 As an experiment, I did just this at the entertainment show referenced above and only, say, 50% of the time was I approached with a friendly smile and pleasantry. That’s HALF the booths I went on whose team ignored me. I could have been the purchasing manager at the Royal Opera House or the top-rigging supervisor at the O2 for all they knew. I’ve got a great story about someone who walked onto a stand to buy a €1m crane only to walk off and purchase it from a competitor.

Now your On Stage strategy aligns with your Backstage one and you’re really ready to kick some ass.

My next blog will help trade show visitors navigate the miles of aisles that snake onwards as exhibition season continues.