Harlyn, of Blyth, UK, specialises in engineering-led heavy transport. It moves large, complex pieces of equipment for clients that are often global leaders in their fields of expertise. In this instance, it was necessary to calculate the centre of gravity of a Pipe Line End Termination (PLET) prior to transportation.

The load cells on hire included DLM’s cabled compressive load cells calibrated to 100t. These products are manufactured using high strength stainless steel and are particularly suited to rugged environments, specifically vessel weighing and hydraulic lifting operations. Moreover, DLM has a centre of gravity software package to be used in conjunction with its TW-3.0 range of products. It features a tare function, various weight units, and the ability to calculate and visualise the centre of gravity dynamically using up to 12 TW-3.0 load cells.

The load cells combined with a 600t capacity crane, 12m-long spreader beam, self-propelled hydraulic trailers, climbing jacks, and an assortment of other ancillary equipment to complete the task. The load was weighed four times and recorded in real time by Harlyn’s in-house software on a laptop, in addition to DLM’s TW-2.0-S standard handheld display; the results correlated within 0.25% across the tests.

Hamish Adamson, managing director at Harlyn, said: “Engineers from the equipment [PLET] manufacturer provided a centre of gravity estimate and a window; we designed our lifting arrangement to suit the extremes of this window, and had all equipment on site. Once we weighed the equipment and had a known centre of gravity, we could choose the preferred rigging gear from the different engineered options to obtain a flat lift—in other words, to avoid there being a tilt on the cargo.”

Adamson explained that short-term hire of the equipment was preferable because the load cells arrived fully calibrated and effective. “Given the nature of our work, such technologies can sit on the shelf for a period of time, whereas renting them means they’re delivered and ready to use immediately,” he said.

Adamson reconnected with Martin Halford, managing director at DLM, at the recent RenewableUK Global Offshore Wind event, but the companies have frequently collaborated on similar hire agreements in the past. Adamson’s primary business at the event was to network with wind energy professionals, having endured a period away from in-person eventing due to the Covid outbreak.

Halford said: “Our standard compressive load cells have been a stable design now for over 20 years and have widely been used across a variety of industries. Although a stable design, we have made significant improvements and added features to them over the years, which include the latest development of a COG [centre of gravity] compatible software to pair with our TW-3.0-S handheld display. It is great to be able to help Hamish and his team with his load monitoring requirements and it is exciting to see how his company is growing from strength to strength.”

Adamson said: “[DLM’s] range covers a vast amount of equipment, and the load cells are simple to use. These compressive load cells again performed well, and the results gave us the information we needed to complete safe transportation for the customer. They are our go-to provider for this type of equipment, and we will continue to use the rental option for future applications.”

He added: “Business is good; we’re busy fulfilling offshore wind, onshore civil engineering, and oil and gas contracts. We were founded as the pandemic hit, but we have managed to grow during challenging times and have assembled a great team that delivers projects across the world—including Europe, the Middle East, and Far East.” 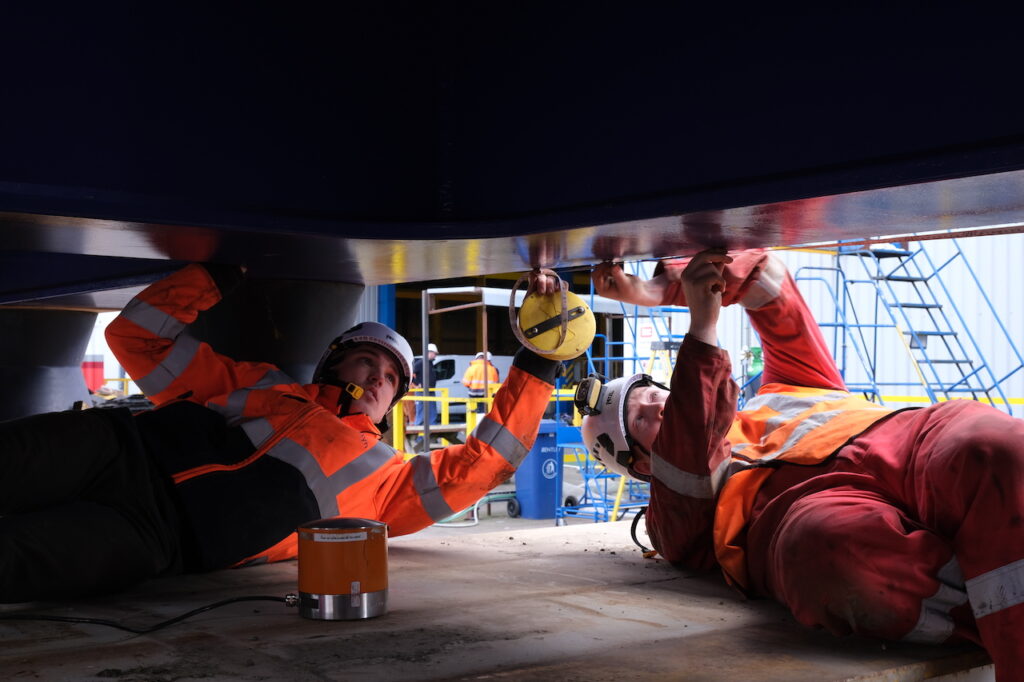 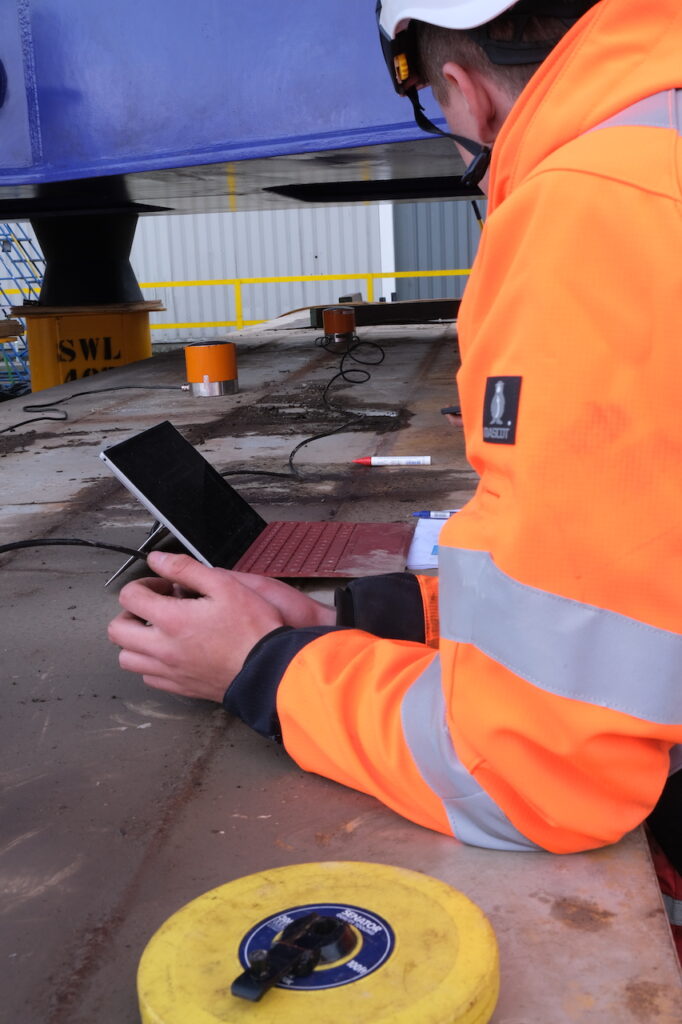 Caption: The load was weighed four times and recorded in real time by Harlyn’s in-house software on a laptop. 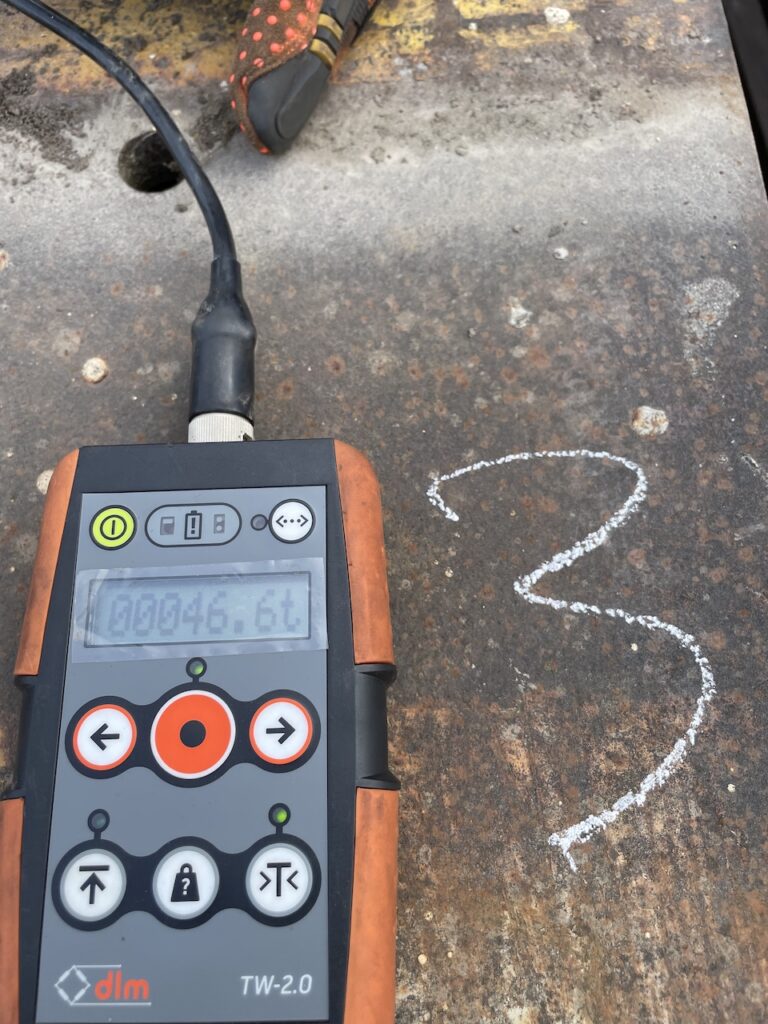 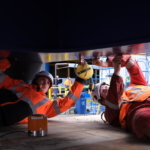