A 350-ton (310-tonne) capacity Hydra-Side low profile skidding system was the centerpiece of a multifaceted transformer delivery and installation in Sweden recently.

The LP350 skidded the 264-ton (240-tonne) transformer under an overpass—a planned manoeuvre on the 25-mile (40km) route from Sundsvall to Nysäter—and then into its final position. The 37 ft. (11m) long, 12.5 ft. (3.8m) wide, 15.5 ft. (4.7m) high transformer was delivered by Jinert, a Swedish lifting and material handling company, for its customer, DSV, a global transport and logistics firm. Including the truck, the entire transportation weighed in at 360 tons (327 tonnes).

Jinert purchased the LP350 after having attended Rapid Response Solutions’ (RRS) open house event at its Portsmouth, UK facility last September. There, Hydra-Slide’s European distributor showcased and demonstrated the entire range of equipment, including the LP350.

Joakim Andersson, heavy project division at Jinert, said: “We already had an extensive fleet of equipment, but we were challenged with the sliding, lifting and transportation of a transformer from a vessel to its foundation; it was a big project. The planning survey meant that en route we had to unload and slide the transformer under a bridge, reload it and continue the journey, which was the most efficient method of getting it to the site. A requirement was to stay as low as possible, which is why our research led us to the Hydra-Slide product. We worked with a 4-inch (10 cm) margin between the transformer and the overpass, sliding approximately 115 ft. (35m).”

The LP350 represents the continued evolution of the low-profile range that also includes the XLP150 extreme low-profile system. In contrast to their heavy track counterparts, these products are completely hand-portable, compact and ideal for use in areas with limited access or clearance.

An overnight road closure was implemented to facilitate the underpass slide. Cold weather and snow presented further challenges for the night crew; trucks were called in to salt the road surface to ensure the equipment had sufficient traction.

Andersson explained that the team also had to overcome an added complication beneath the bridge because of a gradient. By contrast, the 39 ft. (12m) slide onto the foundation was easier as the ground was flat. A track length of 59 ft. (18m) was used throughout with steel plates to distribute ground bearing pressure. The skidding system was powered with a split flow pump and a hydraulic gantry was used to lower the transformer onto the skidding equipment.

Andersson said: “We were very pleased with the [Hydra-Slide] system. We have a history stretching back 50 years—principally in Sweden but around the world too—and a hallmark of the company has always been innovation and development of our equipment fleet. The LP350 fits with that overarching theme.”

In addition to the skidding equipment and gantry, Jinert also utilized jacks and a heavy trailer. The transport portion of the project was subcontracted in this instance as Jinert’s equipment was already committed to another job. It did, however, supply four Goldhofer axles in addition to the 16 provided by the subcontractor, totalling 20 axles.

Jinert has 18 depots stretching from Trelleborg in the south of the country to Varberg on the west coast and Norrköping near Stockholm. It has a fleet of cranes ranging in capacity from 25-ton (22.5-tonne) to 750-ton (680-tonne) capacity including crawler cranes, mobile tower cranes, mini cranes and crane trucks, in addition to trailers for heavy transport, wheeled loaders and telescopic loaders. The fleet is regularly engaged in varying projects including turbine and generator installation, bridge skidding, chimney assembly and general construction.

Caption: A hydraulic gantry was used to lower the transformer onto skidding equipment. 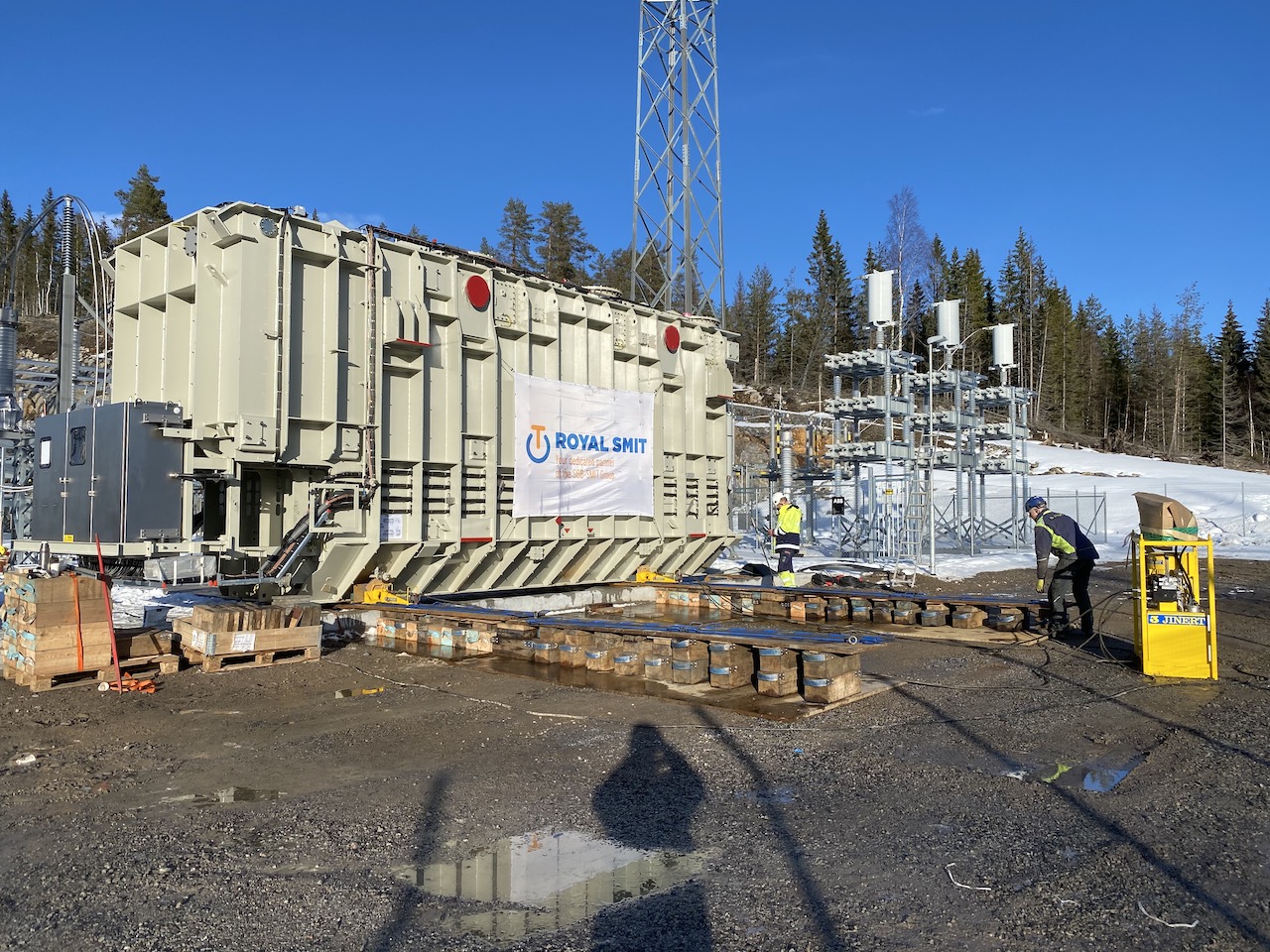 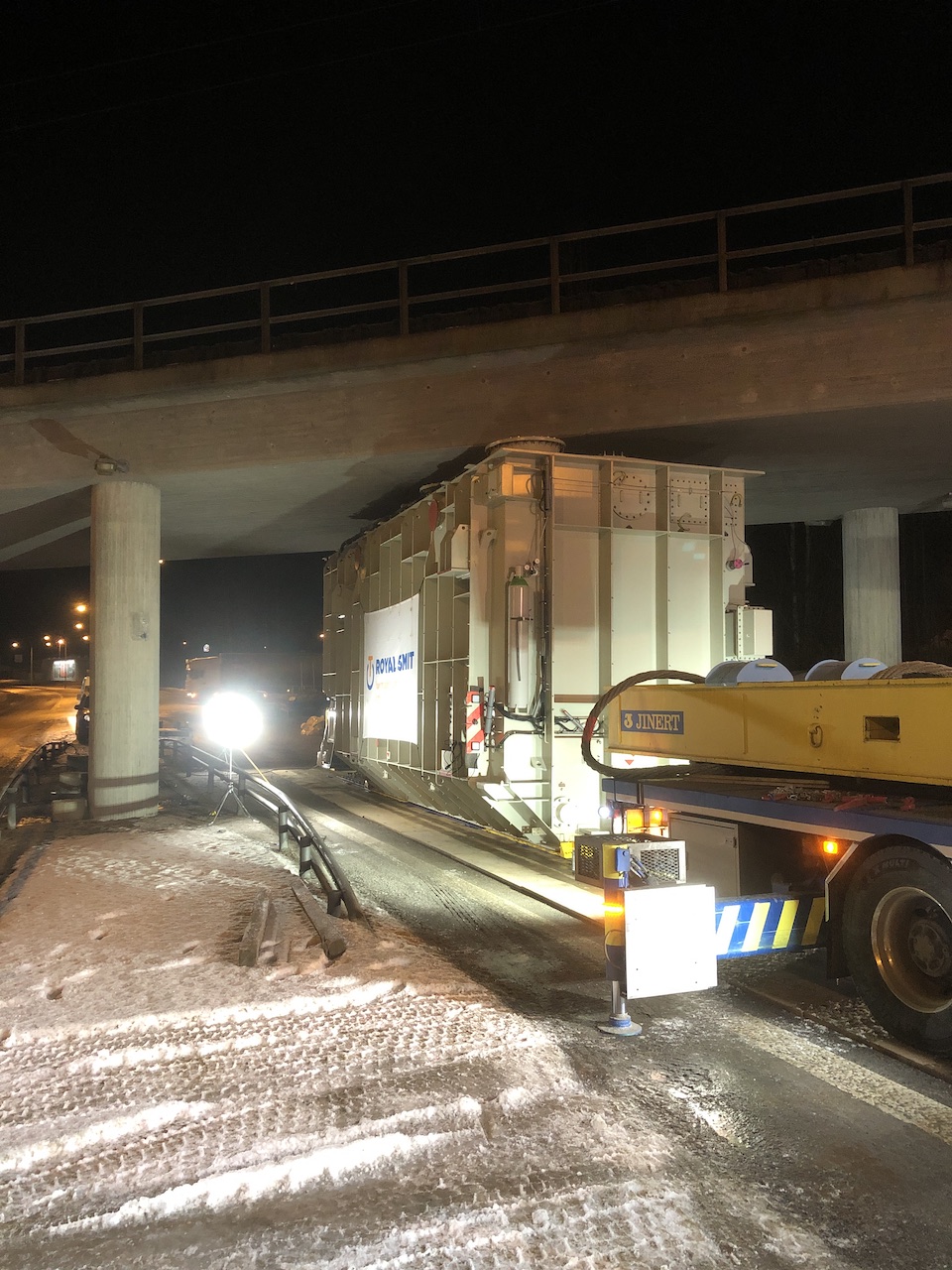 Caption: Under the bridge, the crew worked with a 4-inch (10 cm) margin between the transformer and the overpass, sliding approx. 115 ft. (35m). 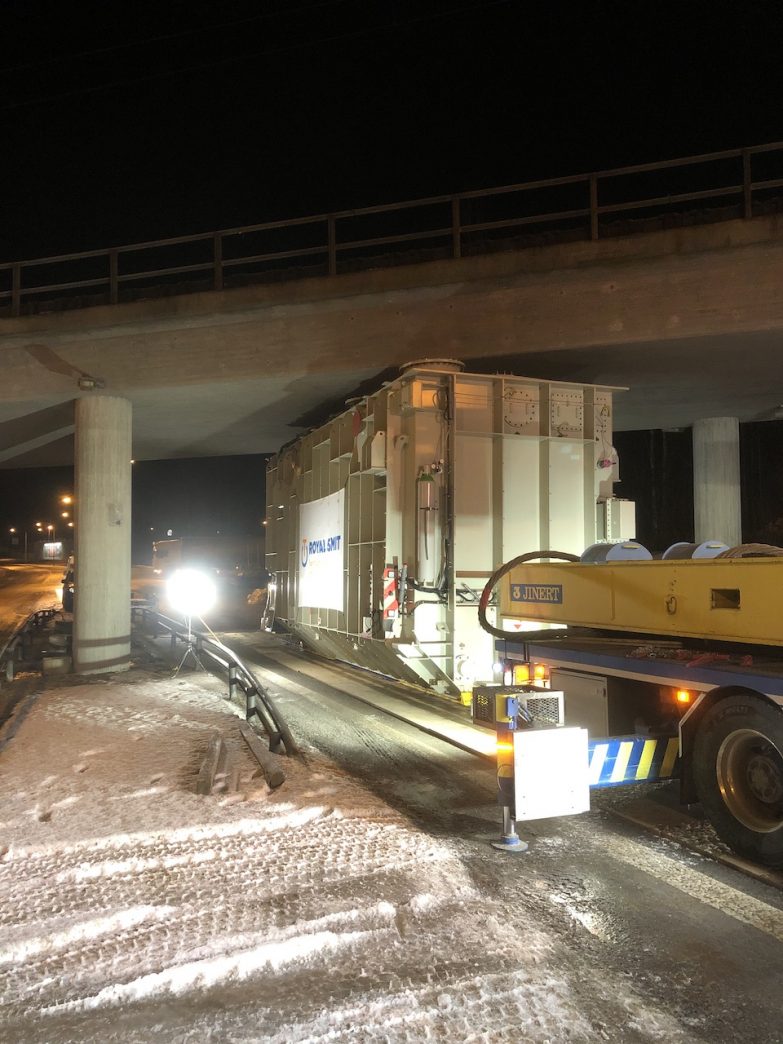 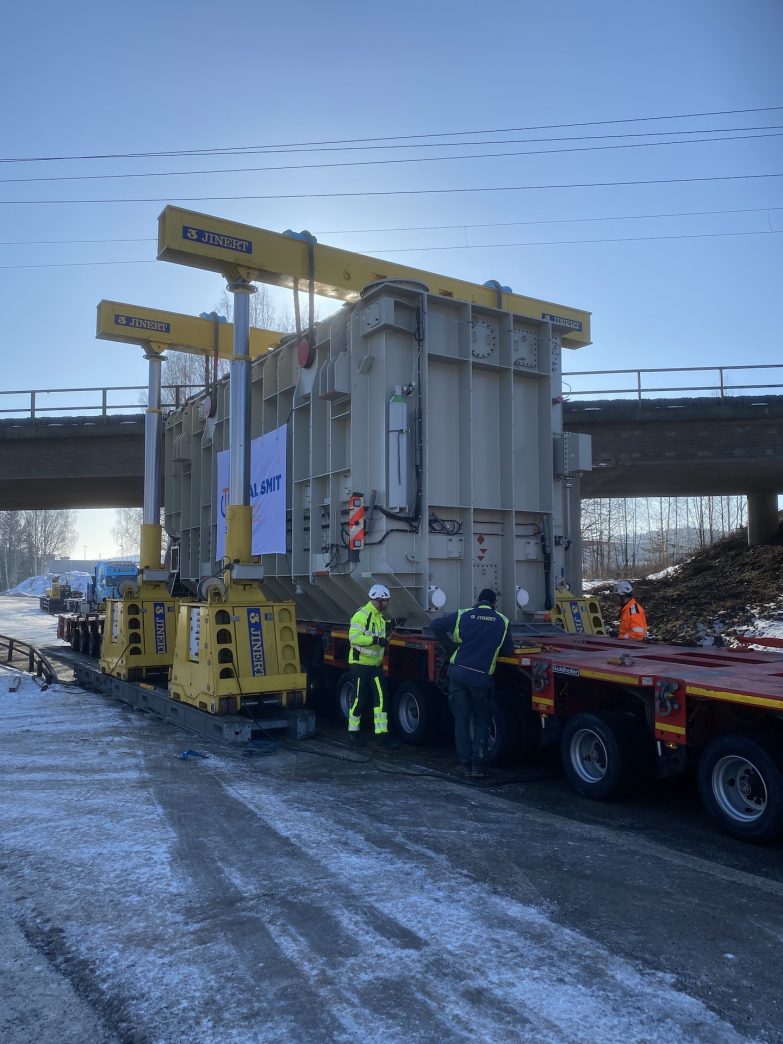 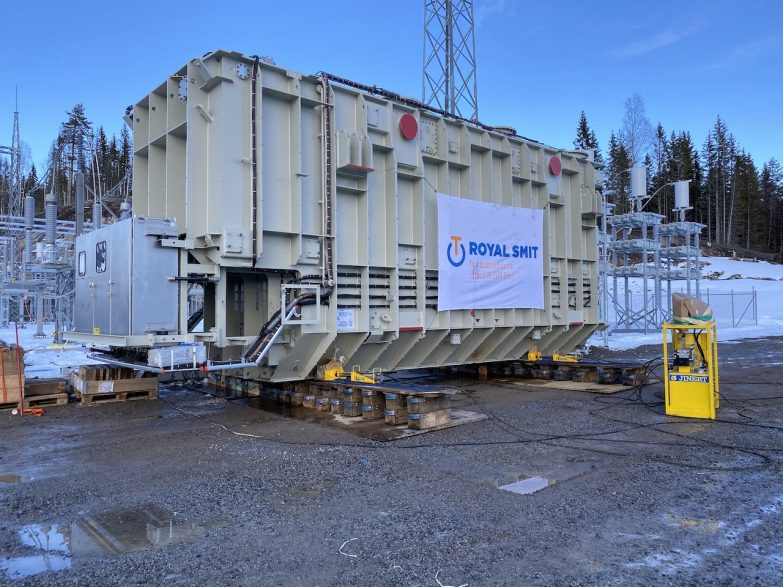 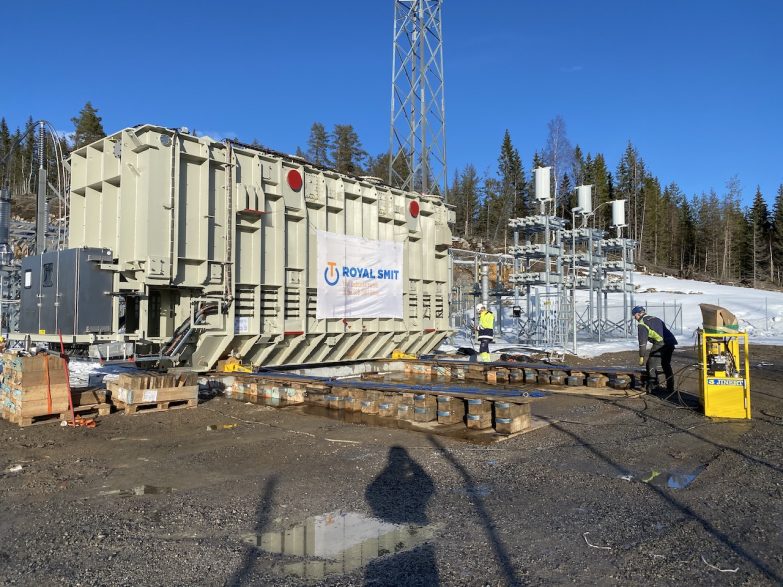