RRS accepted a scope of work from transport and logistics company CTS SpA to unload and skid the transformer into position upon its arrival from Italy, where Tironi had manufactured the 6m by 2.4m by 4m unit. Two standout problems were the live substation environment, which had several areas that could not be shutdown, and uneven terrain as a road sloped away in two directions.

Paul Barber, managing director at RRS, said: “We used the HT300 because the ground conditions between the road and the final landing position 15m away was not all concrete; some areas were just loose stone and weren’t load bearing. Uneven ground meant there was a 450mm height difference from unloading position to landing spot. [Using the HT300] we were able to set the support stands out every 3m to level the track in both directions. The HT300 is designed to work without the tracks being fully supported, allowing it to bridge gaps.”

Barber explained that an added benefit of having a range of Hydra-Slide equipment is that RRS can use one power pack for jacking, skidding, and final alignment. An integrated propane engine powered the 23-2-4P; although the site was a power station there were no three-phase supplies for the electric power pack. A crane was considered for this project but due to limited space onsite and the aforementioned ground sloping, hydraulic skidding was the preferred option. Additionally, there isn’t a crane big enough based on the Isle of Wight so the cost of shipping would have been prohibitive.

Barber said: “This was the second transformer we have installed on this site in the past year. We won the work off the back of previous successful transformer installations across the UK. The Hydra-Slide fleet has given us the ability to carry out tasks like this in a safe, efficient manner. Our customers are working on sensitive sites where safety is the highest priority, and having us turn up with fully-engineered, CE-marked equipment with operating manuals, rather than homemade or makeshift solutions, makes approving method statements and risk assessments much easier. Cost always plays a part in winning work; the synchronised skidding system allows us to use a smaller team as we don’t need to employ winches and other components.”

The total track length was 18m and at its highest point, over the final landing position, it was over 1m off the ground. RRS had to raise the transformer with four jacks, remove the track, and then lower the transformer down to the ground. As 15m needed to be covered and it wasn’t possible to get directly in line with the lorry, the alignment shoes, used for final placement of heavy loads, moved the transformer sideways into its eventual position once off the skidding system.

The disposal contractor had taken the old transformer away in pieces before RRS got to site. 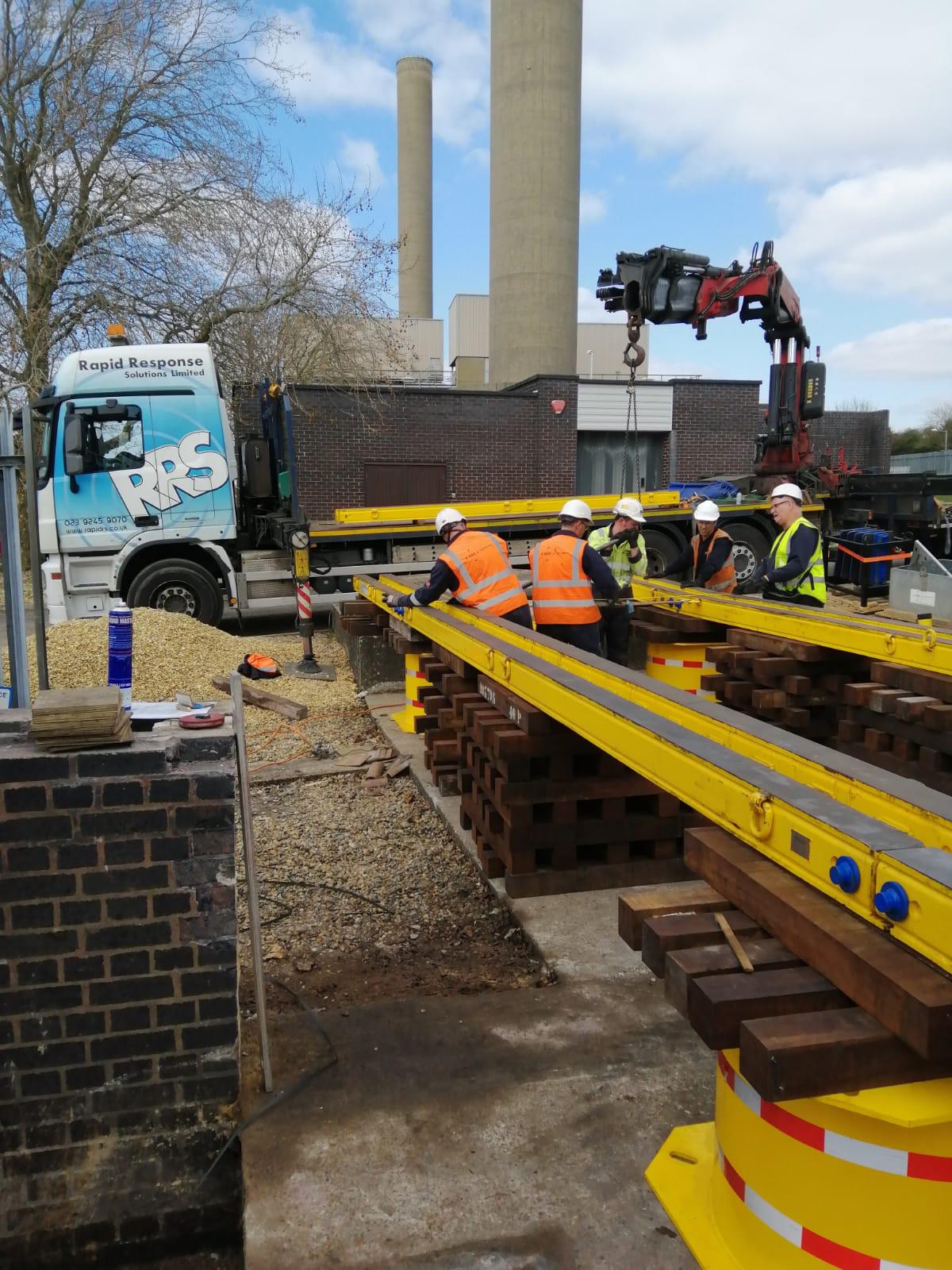 Caption: RRS skidded the load 15m from unload to its final position. 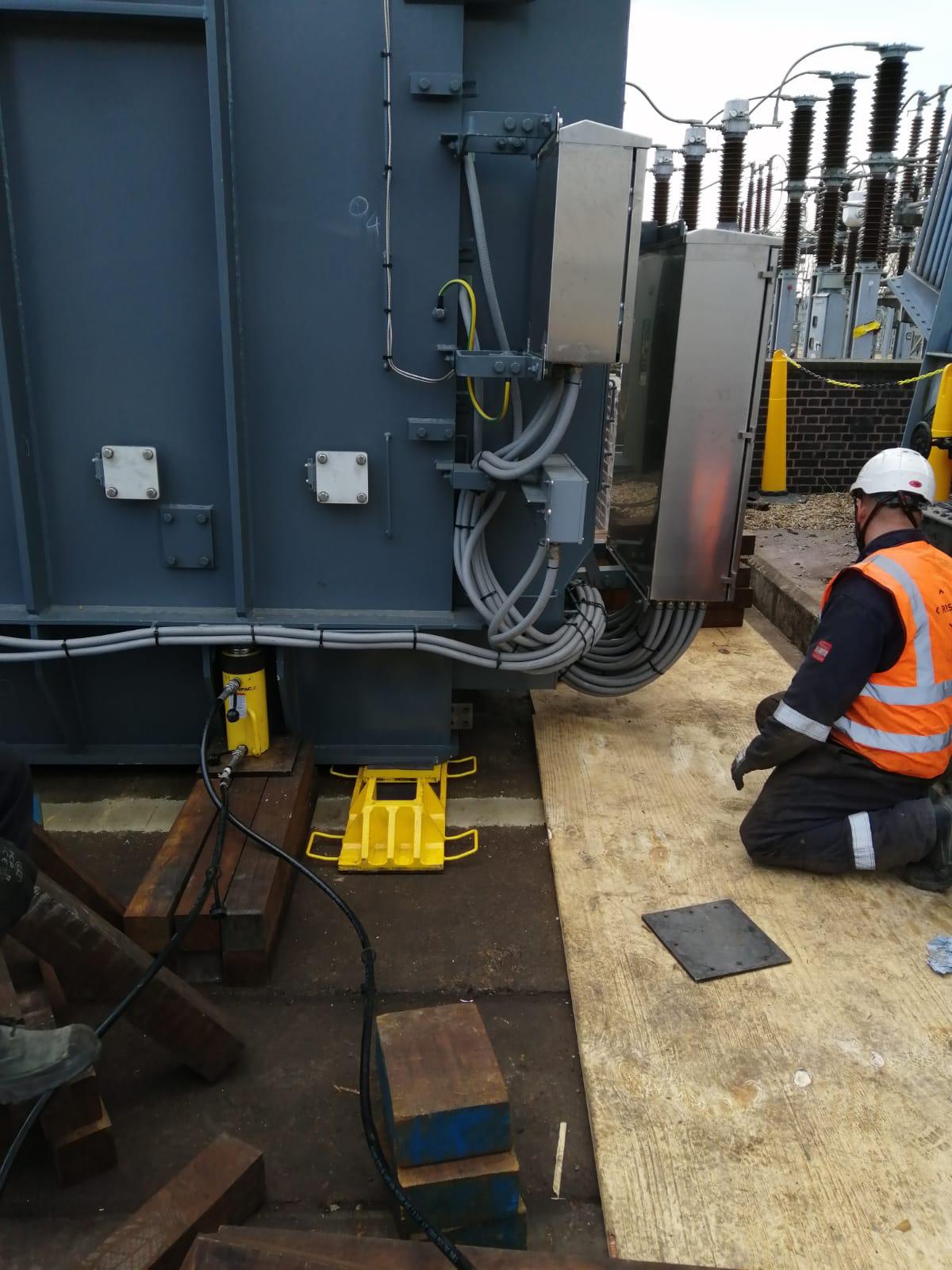 Caption: AS500 alignment shoes moved the transformer sideways into its final position once off the skidding system. 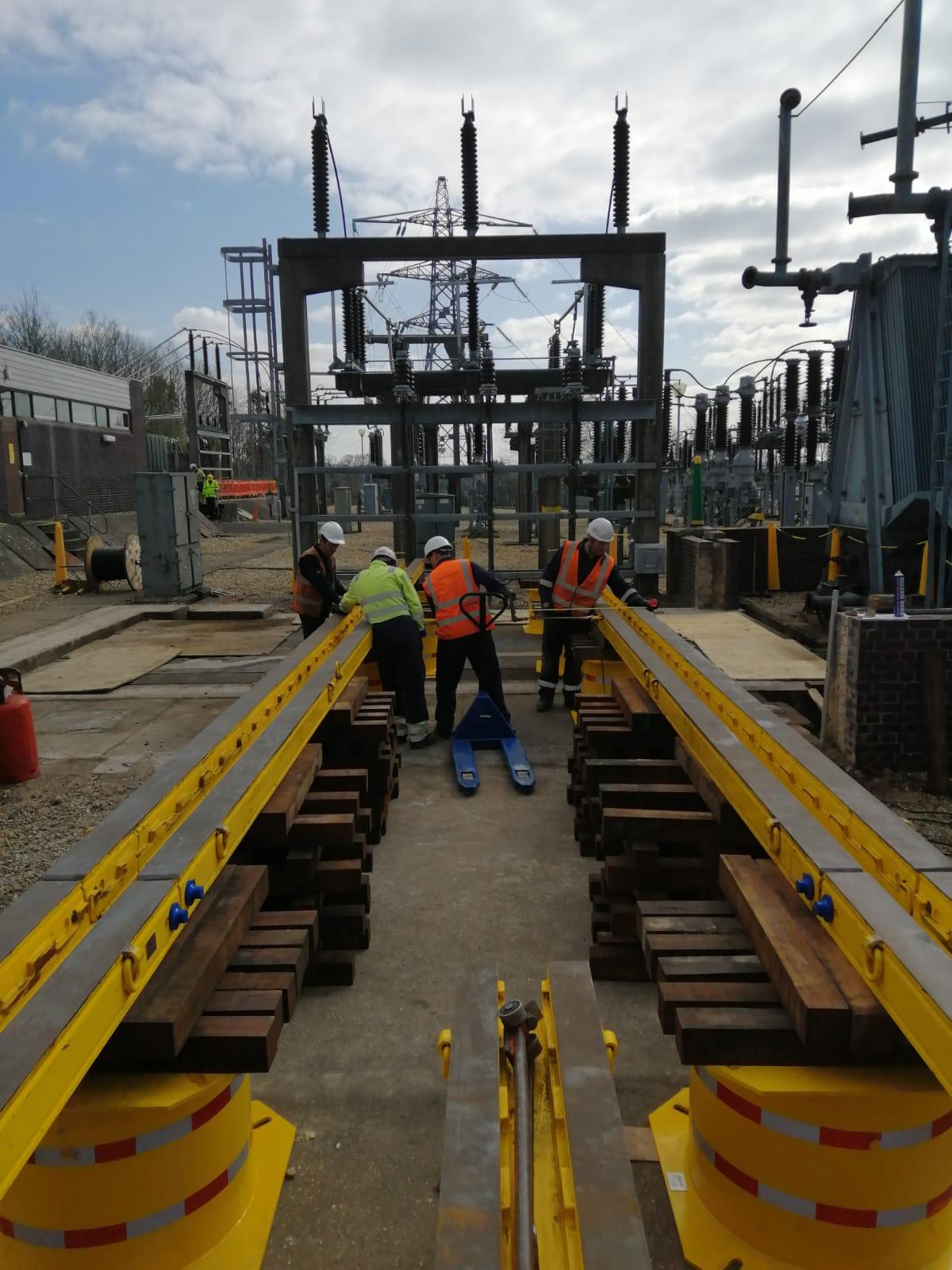 Caption: The total track length was 18m and at its highest point it was over 1m off the ground. 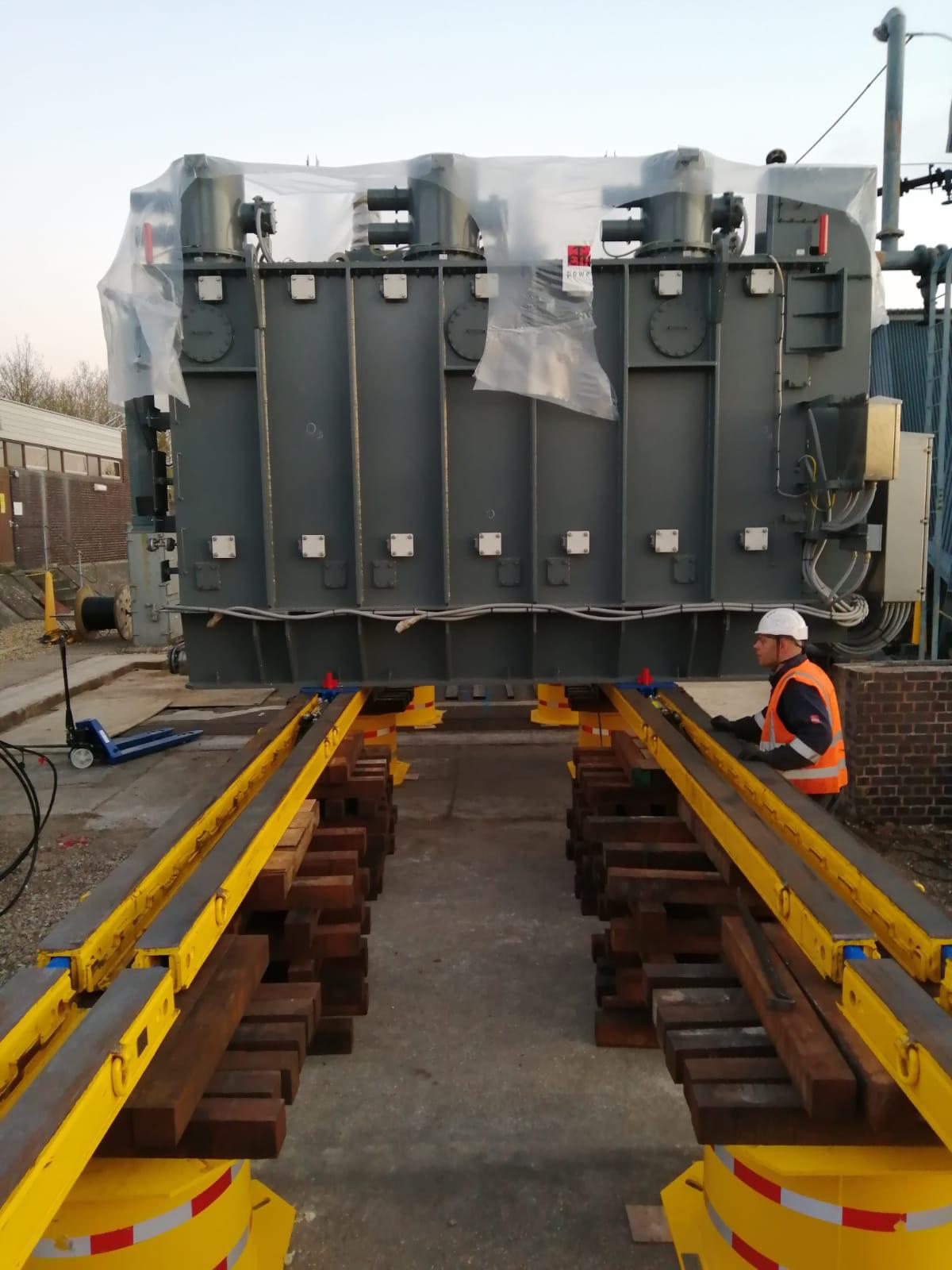 Caption: Uneven ground meant there was a 450mm height difference from unloading position to landing spot. 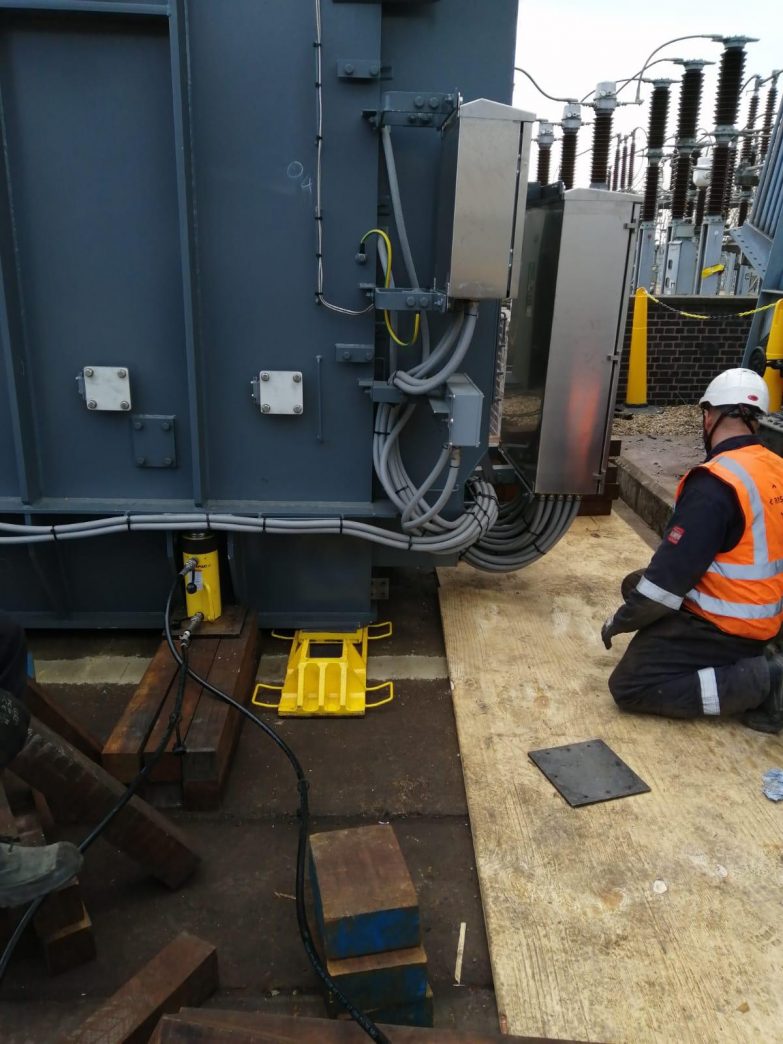 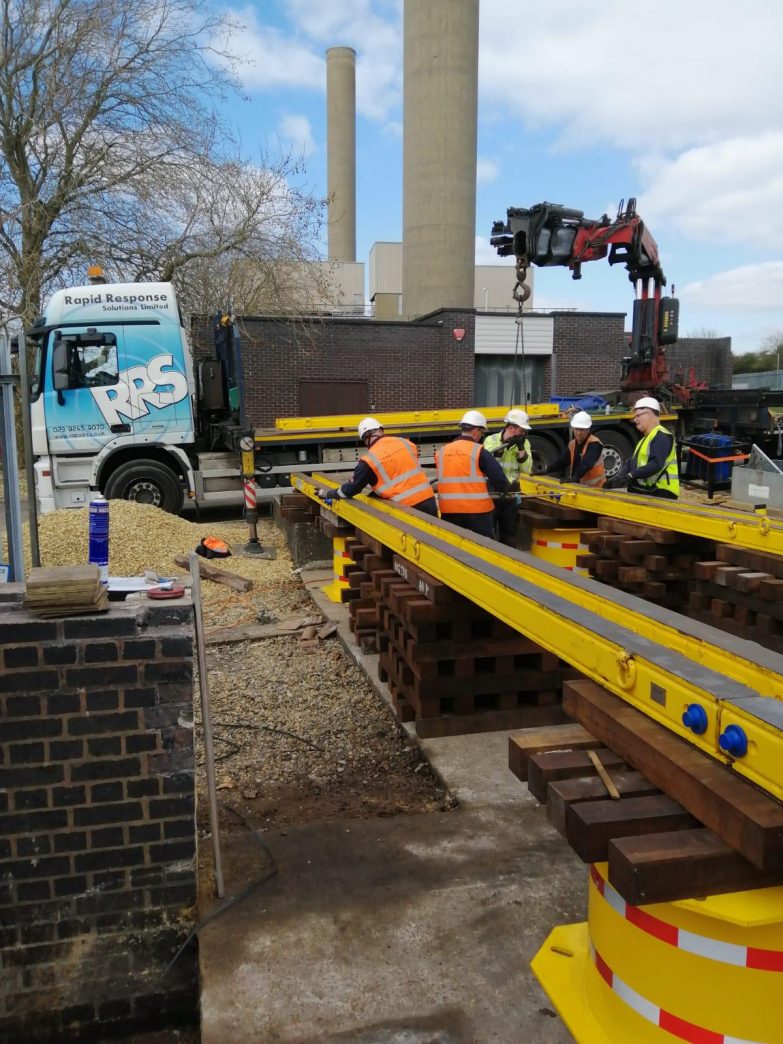 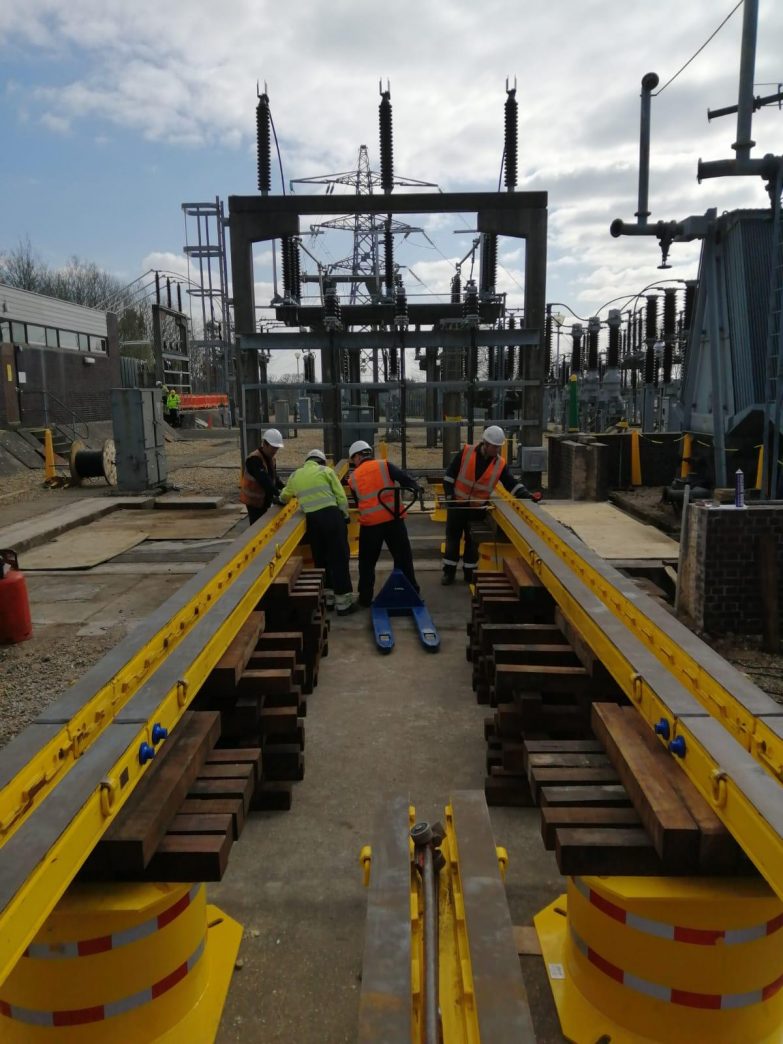 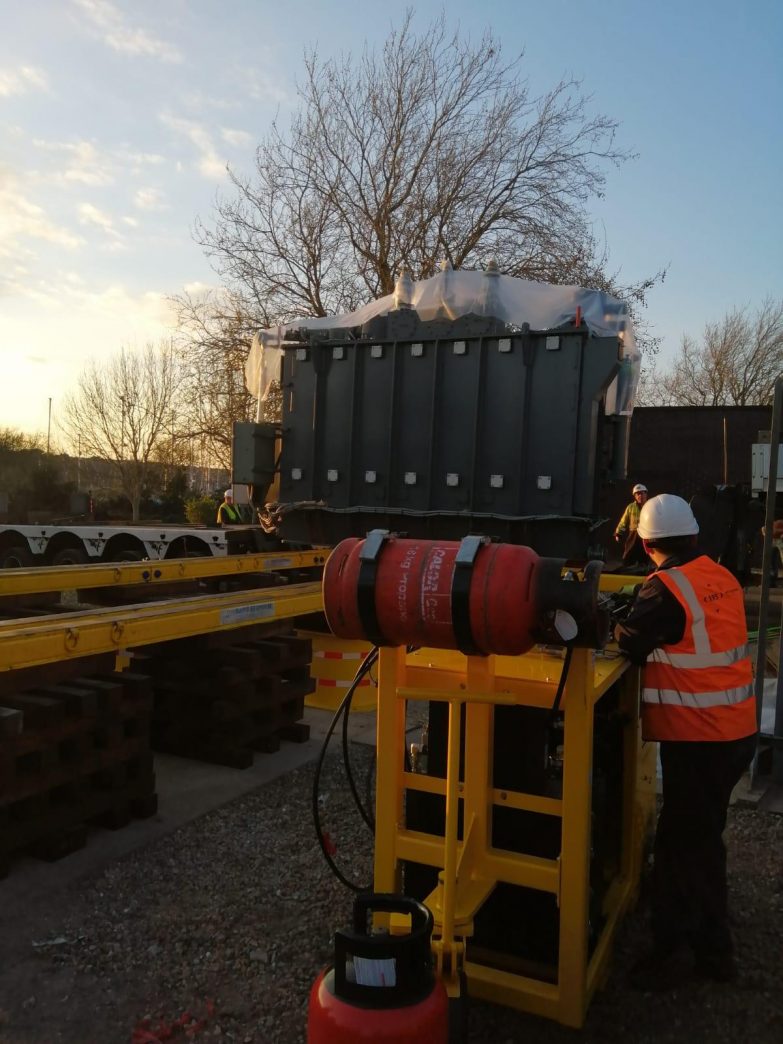