End users of overhead cranes, particularly in the steel sector, have been urged to consider the safety benefits of installing emergency brakes, especially in environments where critical lifts are commonplace. Nucor Corporation has recently retrofitted cranes at a number of locations—and others have been implored to follow suit.

Electric overhead traveling (EOT) cranes are ubiquitous in steel mills and other industrial facilities, where they can be up to 450 tons or more in capacity and lift ladles of molten metal that are poured into casting machines. Imagine therefore the catastrophic scene when, say, a gear shaft should fracture and a load is dropped. The damage to property and inevitable injury, or worse, to personnel is incalculable. It could even lead to the closure of a facility, as in the case of Burnside Steel Foundries, of Chicago.

Pintsch Bubenzer, a manufacturer of high performance disc and drum brakes for steel cranes and other severe duty applications, is intent on raising awareness of this widespread safety oversight that it said is principally borne out of a lack of education in steel and other end user marketplaces. Mike Astemborski, regional sales manager at Bubenzer, believes that “less than 10%” of cranes in the steel sector, including new ones, are fitted with emergency brakes in the United States.

Jeff Johnson, crane and mobile lead at Nucor Steel Utah, said: “We have installed Pintsch Bubenzer brakes on our hot metal cranes. This has created redundancy in case of a gear train failure. This is a very cost-efficient solution to provide more safety in our production environment that can be accomplished in a short period of time.”

In simple terms, motor drives a gearbox that rotates a rope drum during lifting or lowering operations. On the vast majority of the installed population of U.S. overhead cranes, a brake is only connected to the motor, meaning it is beyond the point of failure in many instances. Emergency brakes that could be connected to the winding drum itself can provide an additional safeguard and keep the load securely on the crane hook.

Astemborski said: “Why would anyone be comfortable about making a critical lift, where a crane is moving an expensive and / or dangerous load, without an additional emergency, failsafe brake? A new ladle crane might represent a $7 million investment for a steel mill and we’re talking about a potentially lifesaving addition at a tiny fraction of that cost. It’s not about money; end users are prepared to invest in safety systems, but they need to better understand the risks and products available.”

Astemborski continued: “All too often a major incident leads to an investigation that exposes the lack of an emergency brake—but then it’s too late. We need to continue our outreach campaigns and endeavors to educate steel and other professionals so they specify emergency brakes at the earliest stage of dialog with a crane manufacturer. Frankly, an OEM is unlikely to propose a cost-adding feature when it could inflate their bid in a competitive tender situation.”

It’s interesting that some end user marketplaces are more aware than others when it comes to emergency brakes, observes Astemborski. In the ports sector, for example, ship-to-shore cranes, used for loading and unloading containers from ships, are routinely fitted with brakes on both the hoist and boom motions, as standard in most cases.

Nucor’s Johnson concluded: “Pintsch Bubenzer has designed these systems to be a compact unit that needs very little alterations to the existing layout of the hoist and trolley area. I feel that together we have a very good solution that will provide us years of trouble-free service.” 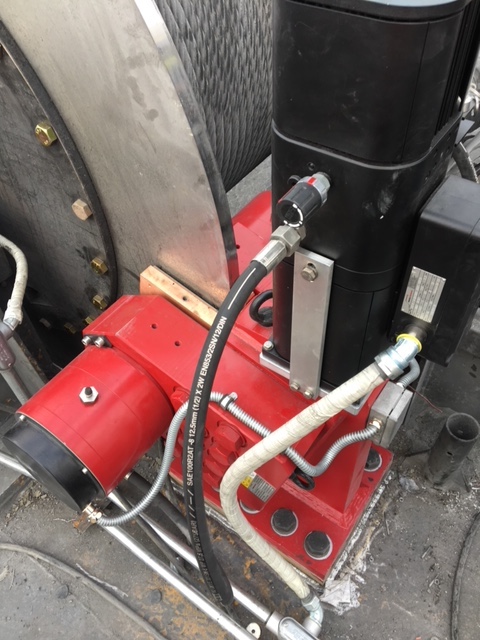 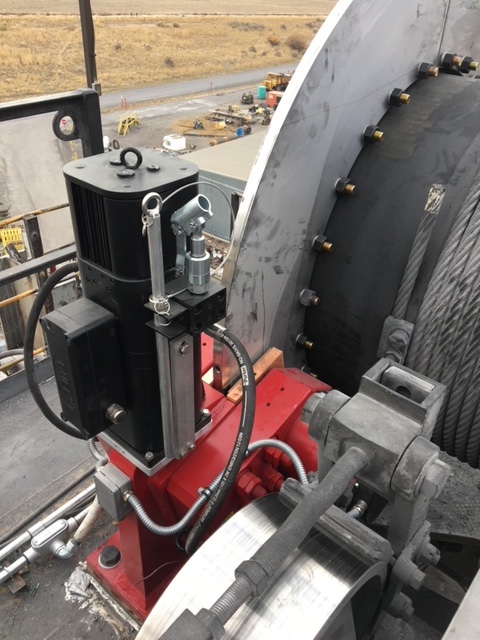 Caption: The Pintsch Bubenzer SF emergency brake acts directly on the ladle crane’s drum, eliminating any chance of drivetrain failure causing a dropped load on a critical lift crane such as a hot metal or ladle crane. Typically the brake is mounted next to the motor, allowing for multiple shafts, gears, and bearings to fail between the brake and the drum.