The manufacturer of custom-built bowsers (tankers) started taking steps to reducing its carbon footprint upon registration for ISO 14001 in 2016; the business also boasts 9001 and more recently gained 45001:2018. However, the newly implemented carbon programme is a more focussed and practical step-by-step initiative.

Terry Beasley, managing director at T&M, said: “Whilst the [14001] standard has had a positive impact, the subject of carbon management is at the forefront of our minds—and hearts—more now than ever before. Further, tendering and pre-qualification requires us to submit data on our carbon, which assists customers to demonstrate tangible benefits to their projects in terms of reducing carbon and / or improving green credentials. Customers need to more widely look at their upstream supply chain and downstream value chain; 80 to 90 percent of carbon impacts are actually outside of their business.”

The four cornerstones of the company’s carbon and energy hierarchy are: avoid, reduce, switch, and offset:

Beasley acknowledged that the initiative aligns closely with the IEMA guidance document, ‘Driving Climate Actions through Environmental Management Systems’, published in 2018. ISO 14001 offers formalised framework for identifying environmental impacts, including climate risks and carbon emissions, while the document goes through 14001 clause by clause to guide company policy making. As the clauses of the standard require companies to consider the issues and go through a particular process, IEMA’s paper helps them to truly put climate change at the heart of the business.

Beasley said: “The chosen pathway doesn’t really matter; we could have adopted PAS 2060 [the British Standards Institution’s Standard for Carbon Neutrality]. What’s important is the end goal. The built environment contributes around 40% of the UK’s total carbon footprint, with energy used in building roads and railways a contributing factor. Net zero is rightly a hot, if contentious, topic and we must demonstrate that authentic carbon reduction is at the core of our company.”

When a contract kicks in for HS2, a state-of-the-art, high-speed line critical for the UK’s low carbon transport future, around half of T&M’s 100 vehicles will be serving projects across the country’s rail network and the other half elsewhere in the built environment, including highways. It’s a fleet that could evolve radically in the near future, Beasley said.

He explained: “There needs to be more efficient energy use in equipment and transport; we would go further if the innovation was there. We already use the most fuel-efficient of engines [Euro 6] but we are exploring the possibility of converting our vehicles to HVO [hydrotreated vegetable oil]. We are constantly investing in energy-efficient equipment and promote a green culture, including the use of public transport to attend meetings and video conferencing versus face-to-face. Our electricity also comes from 100% renewable sources.” 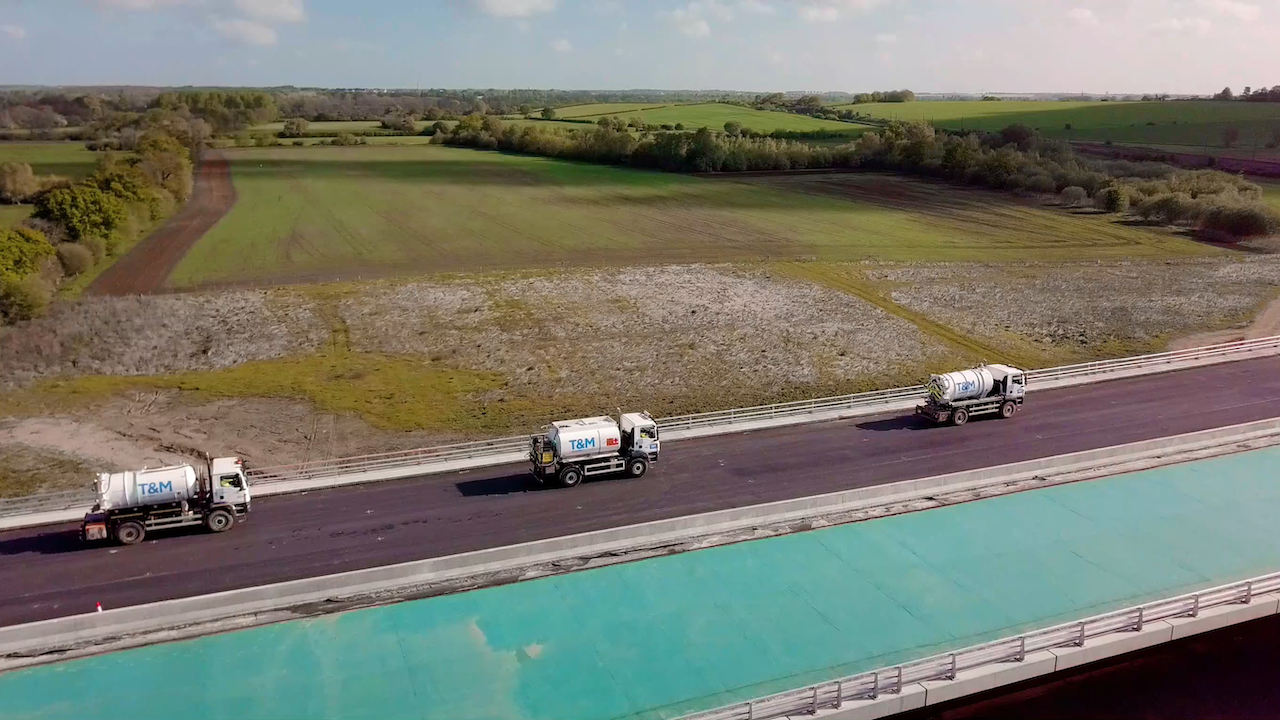 Caption: Three of T&M’s 18-tonne bowsers travel in convoy during the A14 Cambridge to Huntingdon road improvement scheme. Pictured (left to right) are the 4×4 Welfare, 4×4 Fuel and 4×4 Dust Suppression bowsers. These bowsers have a 10,000l capacity. The A14 project has been in progress for the last four years. 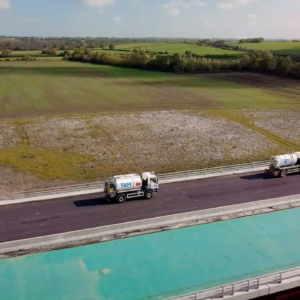