Rockford, Illinois-based The Caldwell Group Inc. has launched a vertical and turning clamp designed for lifting and turning single curved plate or pipe from horizontal to vertical and vice versa.

The model TLC (turning, locking, curved surface), which lifts and turns from zero to 90 degrees, incorporates a vertical lifting clamp featuring a ‘lock open’ and ‘lock closed’ feature, facilitating attachment and removal from the load. A specially designed cam jaw is made to safely lift curved surfaces and flat plate.

The product was first unveiled at the Associated Wire Rope Fabricators (AWRF) Product Information Exhibition (PIE) in Cleveland, Ohio last spring, as an enhancement to the manufacturer’s TL clamp, which itself is capable of turning a single plate or load from horizontal to vertical and back to horizontal through the same 90-degree arc. The TLC joins the same range and is also available in 0.5 to 20-ton capacity.

Dale Kelly, Engineering Manager at Caldwell’s J. C. Renfroe & Sons brand, said: “Actually, it started out as a standalone product but quickly became obvious that since it was based on the TL we could offer it in the same range and tonnages as that clamp, which seemed to make sense for all stages of the supply chain and at point of use.”

Initial interest in the product, which is currently manufactured to order, has been predominantly in the U.S., where it is available through Caldwell’s distribution network. However, the international market has consumed a number of units and export is expected to grow over time, Kelly enthused.

“There are alternative solutions,” he acknowledged, “but nothing specifically for pipe in a clamp style device that we are aware of. It’s worth reiterating that distributors and end users note that there is no need for a specific radius, only a requirement to meet the minimum radius size. Each model is clearly marked with the minimum radius, serial number, capacity, jaw opening, service class, design category, and all the information required for safe use.”

Caption: The TLC’s main purpose is to lift pipes, but it can also lift any curved surface that meets the clamp’s minimum radius specifications. 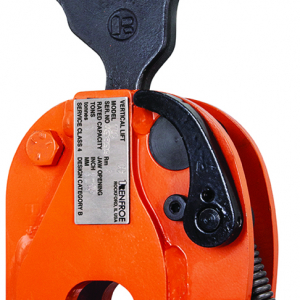