The attachment, supplied by Caldwell distributor Certified Slings & Supply, is known onsite as the master coil lifter. It replaced the previous method that involved three personnel, including one precariously positioned on the rail car truck. Caldwell’s 24,000-lb. capacity product has reduced the time it takes to unload a single car from one hour to 20 minutes and, more importantly, there is no longer a requirement for a rigger beneath the hook (forks).

Ken Jurgensmeyer, director of manufacturing operations at the facility, said: “Previously, we were using our [35,000-lb. capacity Taylor TH350] lift truck with a wire rope sling strapped over the center of 6 ft.-long forks; we’d then manually passed it through the eye of the coil and attached it with a swivel hook to complete the connection. I put myself in the railcar to experience it from the rigger’s viewpoint and it wasn’t satisfactory. Further, we often had to lift at an angle because of how far away we sometimes had to position the forklift. Once we picked the coil, it was taken to the loading dock and awkwardly swung into position so a second lift truck could move it onwards.”

MiTek, which already had several Caldwell products in its fleet, receives the steel coils in batches of six or seven aboard each rail car; a train might have six cars. Using the previous method it would have taken all day to unload a whole train, which can now be completed in a fraction of the time with less people. Jurgensmeyer said that the coil lifter would be required to lift 110,000,000 lbs. of steel per year, which equates to 94 coils per week.

Dan Mongan, special application support / new product development specialist at Caldwell, said: “The reality was, someone could have got injured so when we were contacted by Ken, our first priority was designing a system that removed the need to manually rig the load. As a byproduct, we were also able to speed production considerably. Even the transfer to the second lift truck is improved because we can lower the coils onto a frame from where they are easily picked.”

He added: “The coils can shift during transit so they are very close to each other. In order for the grab to fit, the lifting shoes pivot and the legs are very thin.”

Jurgensmeyer originally contacted Rockford, Illinois-based Caldwell when MiTek started taking delivery of longer trains from domestic steel suppliers, resulting in increased throughput. The master coil lifter is only being used on domestic delivery of master coils (a wide roll of coiled steel, slit into many narrower coils), which range in weight from approx. 22,000 lbs. to 24,000 lbs. apiece. International deliveries are trucked to the facility having been transported by ship and loaded at ports upon arrival in the U.S. However, currently, 100% of the steel at the Tampa facility is from domestic suppliers, placing further demand on a quick turnaround of rail cars.

Following its successful implementation at the stamping plant in Tampa, another MiTek site in Phoenix, Arizona has also adopted the solution, where it has again enhanced safety and efficiency versus previous methods. “Actually,” said Jurgensmeyer, “We have introduced the concept to [MiTek] sites worldwide based on its inception here.”

He added: “Naturally, we required Caldwell’s support to get the system up to speed but everyone we’ve dealt with has delivered an excellent service. I’ve worked with them previously and I’ve long been impressed with their customization capability but moreover their ability to back it up with first-class engineering. They have improved the product even further since its initial installation and it’s always a pleasure to work with their engineers to achieve continued improvement of best practices at our site and others in the MiTek portfolio.” 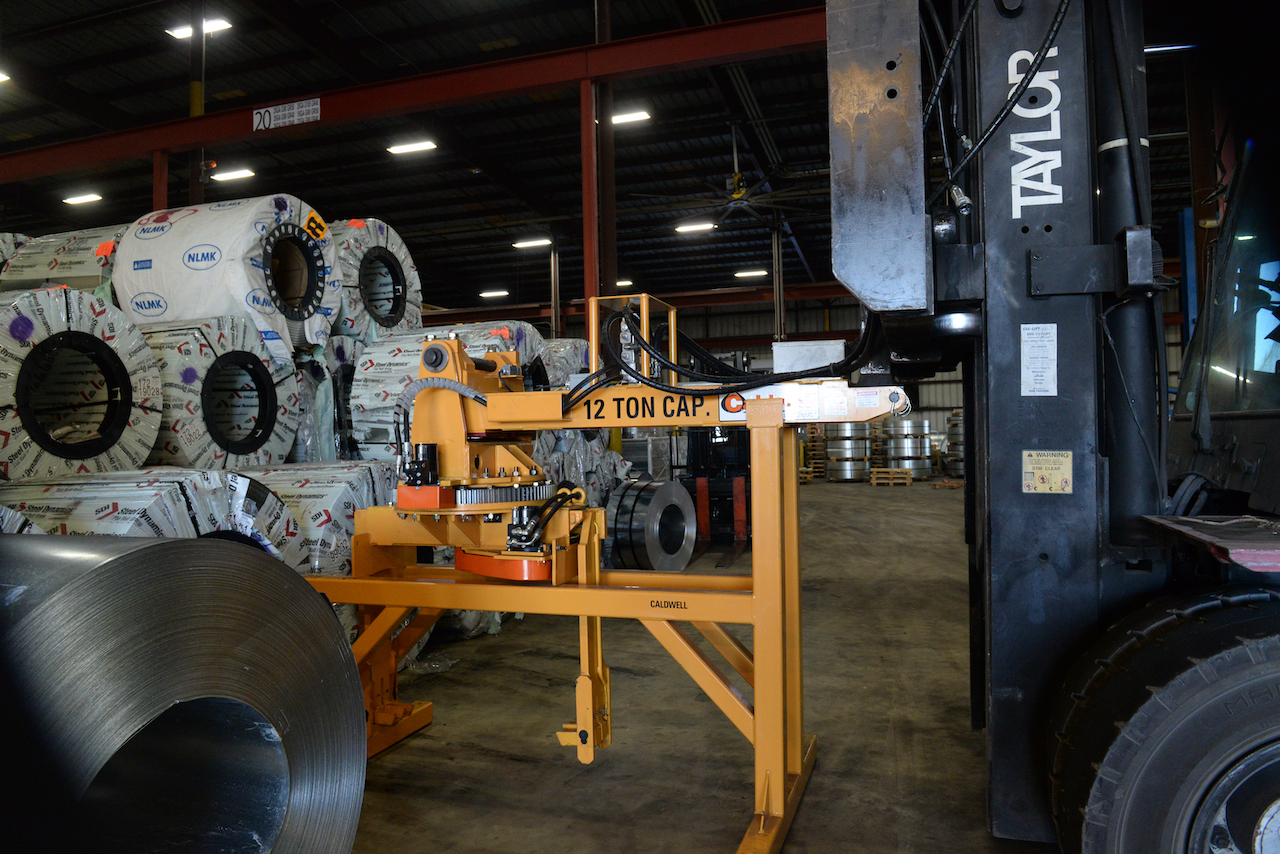 Caption: The master coil lifter attaches to a forklift truck. 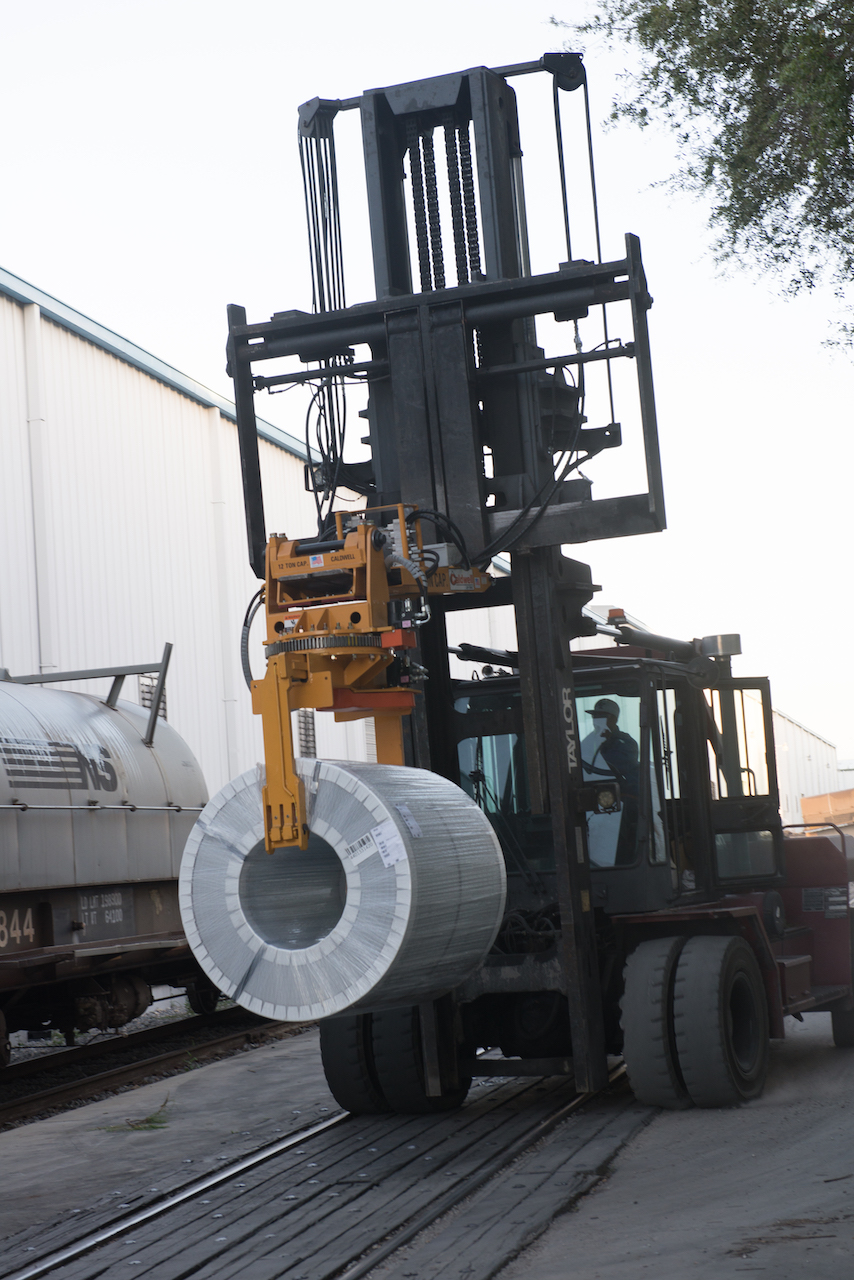 Caption: Once picked, the coils are taken to a loading dock. 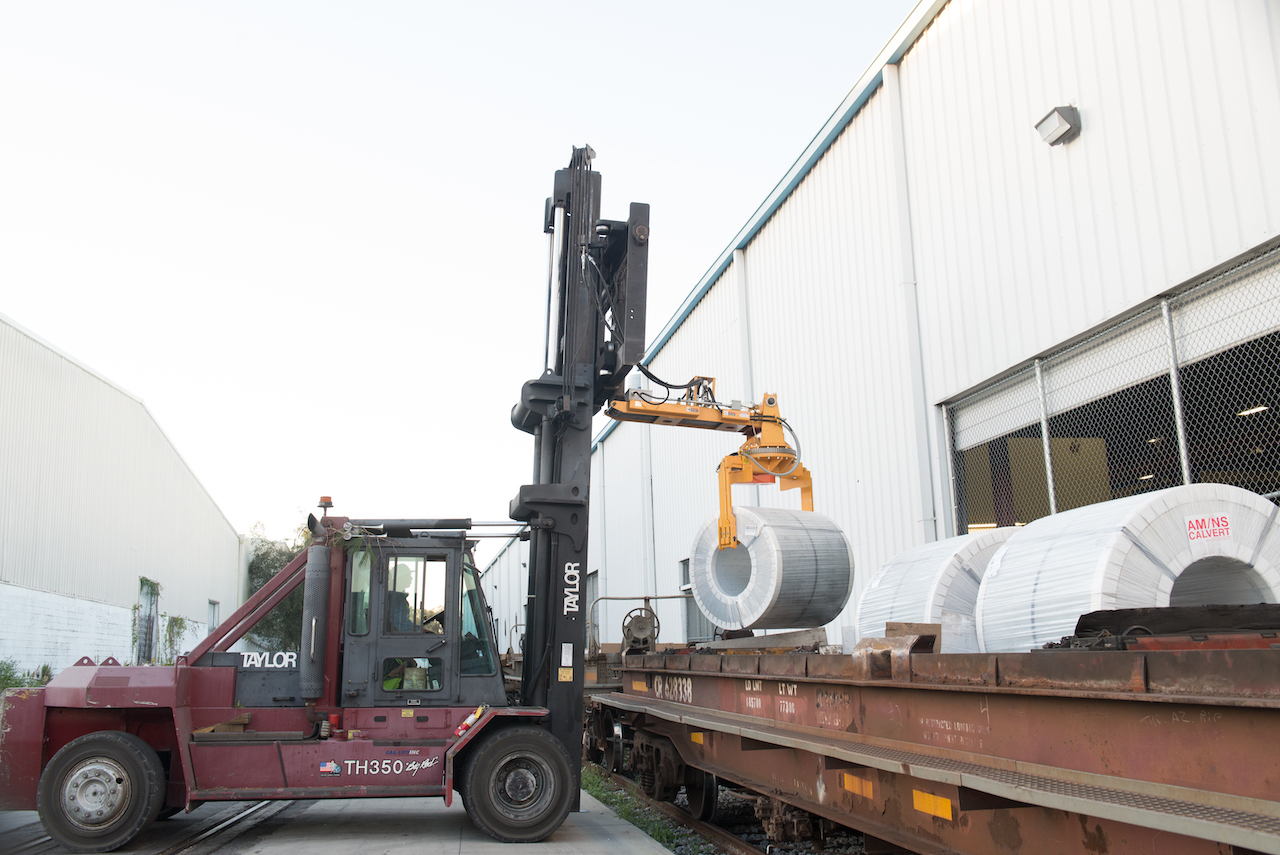 Caption: MiTek receives the steel coils in batches of six or seven aboard each rail car. 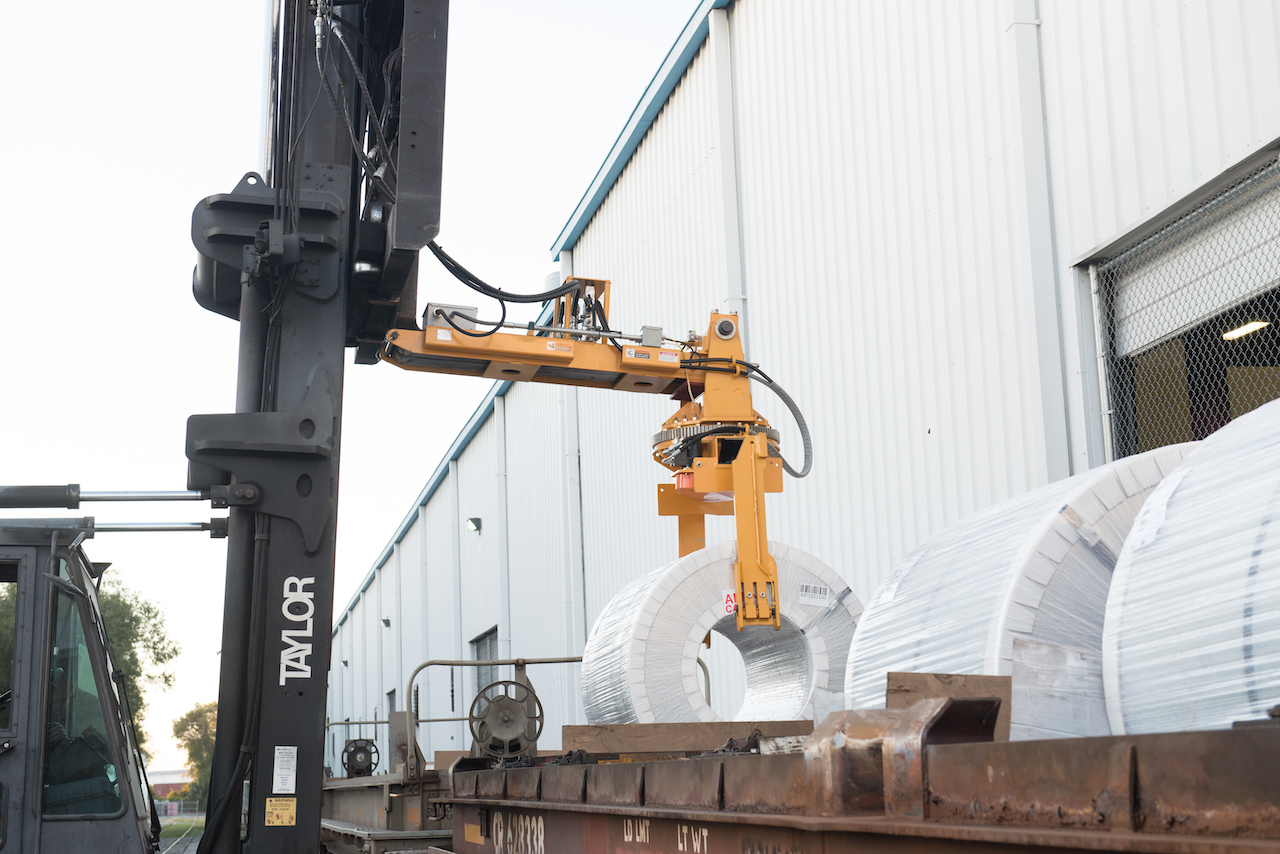 Caption: The coils can shift during transit so they are very close to each other. In order for the grab to fit, the lifting shoes pivot and the legs are very thin. 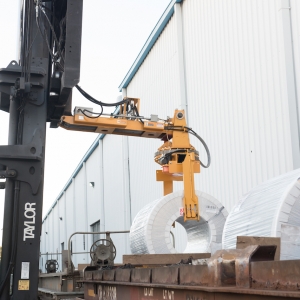 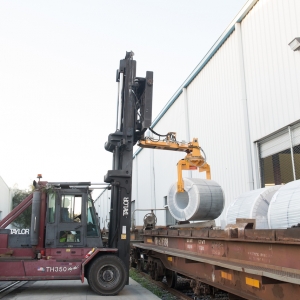 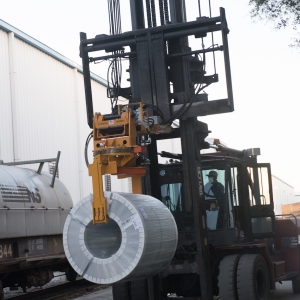 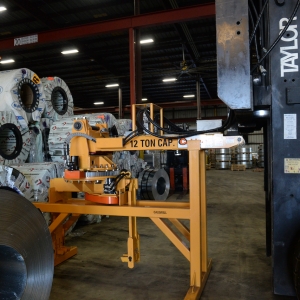