Terminal operators and owners are increasingly looking to increase the size of their quayside container cranes, which presents a series of challenges that must be overcome, such as coping with increased wheel loads, says Richard Phillips, mechanical engineer, Casper, Phillips & Associates Inc. (CP&A).

Since its inception, the progress of the container crane industry has been remarkable in many ways. Considering the enormous capital costs, one of the most astonishing changes has been the increase in size of equipment and facilities, with no obvious limit in sight. The only things that limit ship size are the water depth and any bridges between the port and open sea. Container cranes have kept up with vessel sizes by increasing their outreach, lift height, and lift capacity. It is evident that the race for lower costs has encouraged shipping companies to procure larger, more efficient vessels.

When ships get wider, they are more stable. This extra stability permits higher container stacks above and below the vessel’s deck. A significant factor leading to the continued growth of container vessels is the economy of scale. As vessel size increases, shipping cost per container decreases. As older ships are retired, they are replaced with newer, larger ships. Taller cranes with longer outreaches are needed to service these larger vessels.

Recent events have also placed additional demands on the supply chain causing port owners and operators to look at faster ways of increasing container throughput. Utilizing existing infrastructure is one way to do this. By putting new cranes on an existing dock, owners and operators avoid the expense and delay of constructing a new facility and receive the benefit of servicing larger vessels. Regardless, when larger vessels want to call the port, the port needs the infrastructure to service the containers on the larger vessels. These larger cranes weigh more and put larger loads on the dock. So, the docks need to have the higher strength needed or be upgraded to support the larger loads.

Designing cranes with longer outreaches and larger lift heights while minimizing the wheel loads is not easily accomplished given the cantilevered nature of dockside container cranes. A cantilever is structurally inefficient because of the need to balance its own weight. Cantilevered structures appear to be the most efficient ship-to-shore container crane design. As an aside, there is research being performed on other arrangements, so it is possible a better solution exists, but that is an article for another day, perhaps. For cantilevered cranes, waterside wheel loads are dramatically increased as outreaches and lift heights increase to keep up with vessel sizes. Put simply, a wheel load is the amount of load being transferred from a crane wheel onto the supporting dock structure. This includes the crane self-weight, effects of the lifted load, wind loads, and so on.

One physical dimension that has remained constant is the 40-foot hatch opening on almost all container ships. Terminal productivity demands a standard industry practice to work adjacent cranes on every other hatch. This means the total crane width as measured from bumper-to-bumper along the dock must not exceed the center-to-center distance between alternate hatches. That restricts crane widths to approx. 88.5 ft (27m) regardless of crane outreach and height. The 40-ft. hatch opening is the industry standard. Trains, trucks, yard cranes and of course shipping lines are all designed around this standard. It takes a lot of investment from multiple parties to adopt a new standard.

Dock designers need to be concerned about this 88.5 ft. crane width limitation because that dimension limits the effective length of the dock that can be used to support each crane. This limitation, coupled with cantilever inefficiency, longer outreaches, increased load capacity, increased lift height, and higher storm winds loads, has caused dock loading to increase from about 70 t/m at the turn of the century to 130 t/m—and growing. This is an increase of 185% in the last two decades.

In an ideal world, a dock owner would have sufficient documentation including as-built drawings, calculations, soil reports, and material certifications so they know how strong or structurally sound it is. And those findings might reveal that the dock isn’t strong enough for larger cranes.

The usual practice is to use a larger rail and strengthen the rail support structure. In general, new piling is installed for rails over water. For rails on land, increasing the gantry rail beam or adding new pilings can be an option. However, that is not the only thing to consider. Often, larger cranes can be safely installed on an existing dock by following a rational engineering approach that takes full advantage of the as-built dock strength. Sometimes dock designers make conservative decisions during the design and construction process that can lead to the dock having reserve strength. Additionally, concrete can become stronger over time, which also leads to reserve strength. The published dock strength, supported by good documentation, can be considered a reliable minimum; it is almost always possible to find additional capacity from such an existing design.

The crane design engineer also has an important role. By exercising skilful attention to minimizing weight during the design phase, they can minimize wheel loads. It does take engineering expertise to achieve minimum structural weight, but this extra effort can often pay for itself with reduced steel costs and lower demands on the dock.

Another way to reduce wheel loads in high seismic zones is to specify a base isolation system such as the crane base anti-seismic isolation system (BASIS) developed by CPA. The damper system in the BASIS—based on nonlinear time history analysis (NLTHA)—slips when the applied lateral load exceeds the design lateral load, which isolates the crane from the ground motion of an earthquake.

The first step in establishing safe wheel loads for an existing dock is to specify a realistic allowable wheel load based on the loads, outreach, and other physical requirements needed for the new crane. All too often the owner of an under-strength dock tries to transfer the problem to the crane manufacturer without understanding the physical limitations that may make compliance impossible. This often results in crane manufacturers refusing to bid or a crane being delivered that does not meet the wheel load requirements. A crane consultant can estimate realistic wheel loads for various crane sizes, wind speeds and other environmental loading conditions to help the port specify the largest feasible crane.

If a dock is found to have marginal strength, sometimes the most economical solution is to strengthen the dock rather than optimize the crane weights.  If the decision is made to strengthen the dock, keep in mind the potential for a future crane raise or boom extension to increase the useful life of the cranes. Also, it is very likely that future crane orders will be for even larger cranes and will require higher dock wheel load capacity.

If an owner must limit the wheel loads, the manufacturer should be required to prove compliance by measuring the actual wheel loads after completing the crane. The owner should retain the right to cancel the order if the manufacturer has failed to meet his contractual obligation. A good crane consultant can be an asset to an owner to prevent contentious issues. In addition, a good consultant will work with an owner to help make sure new cranes are appropriately sized and will not become pre-maturely obsolete due to increasing vessel sizes. 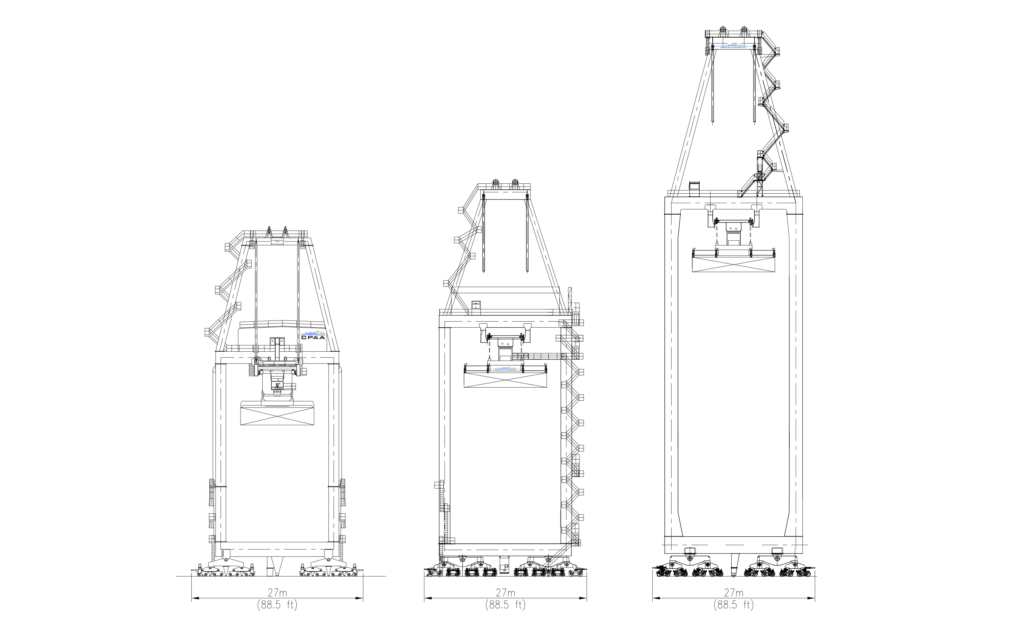 Caption: Crane heights have grown but the out-to-out dimension has remained constant. Left crane is circa 1995; center crane is circa 2000; right crane is circa 2020. The approx. 88.5 ft. (or 27m) crane width limits the effective length of the dock that can be used to support each crane. 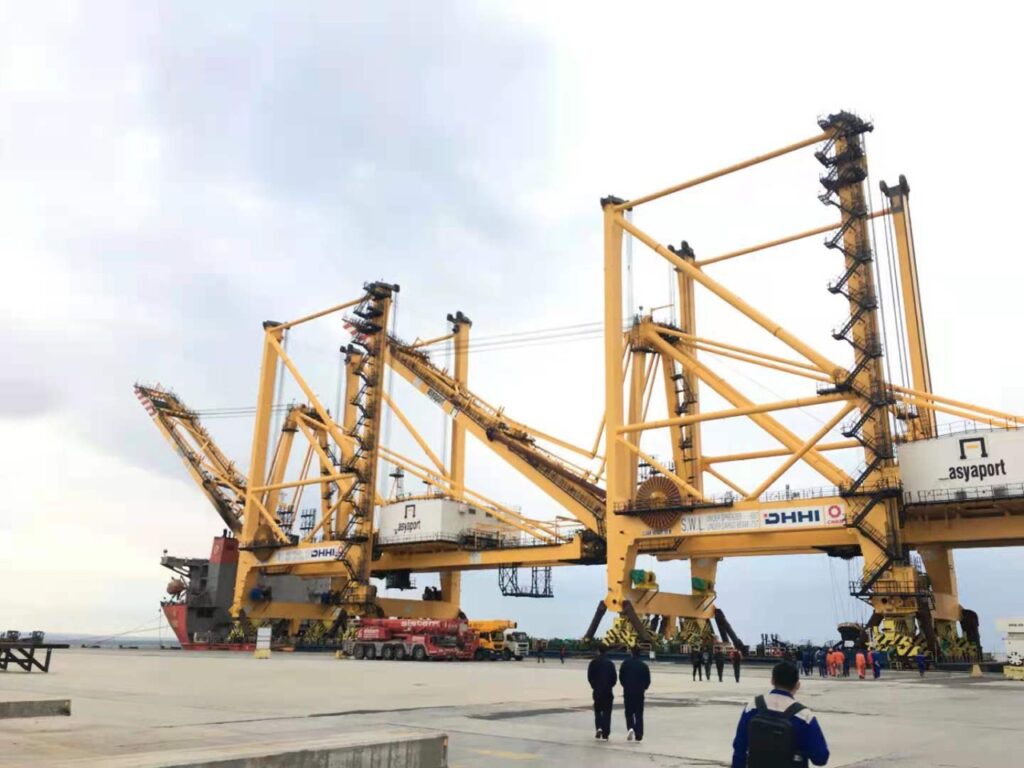 Caption: Container cranes equipped with the BASIS system being offloaded from a vessel to the dock. A wheel load is the amount of load being transferred from a crane wheel onto the supporting dock structure. 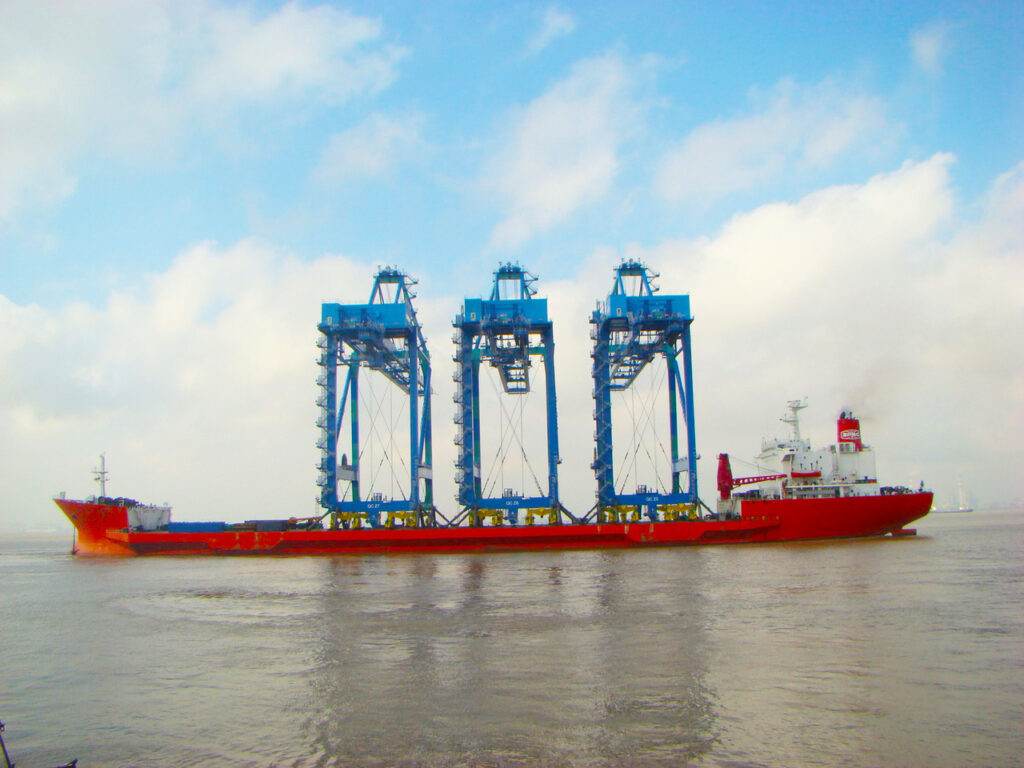 Caption: Three container cranes being shipped fully erect. Container cranes have kept up with vessel sizes by increasing their outreach, lift height, and even lift capacity. 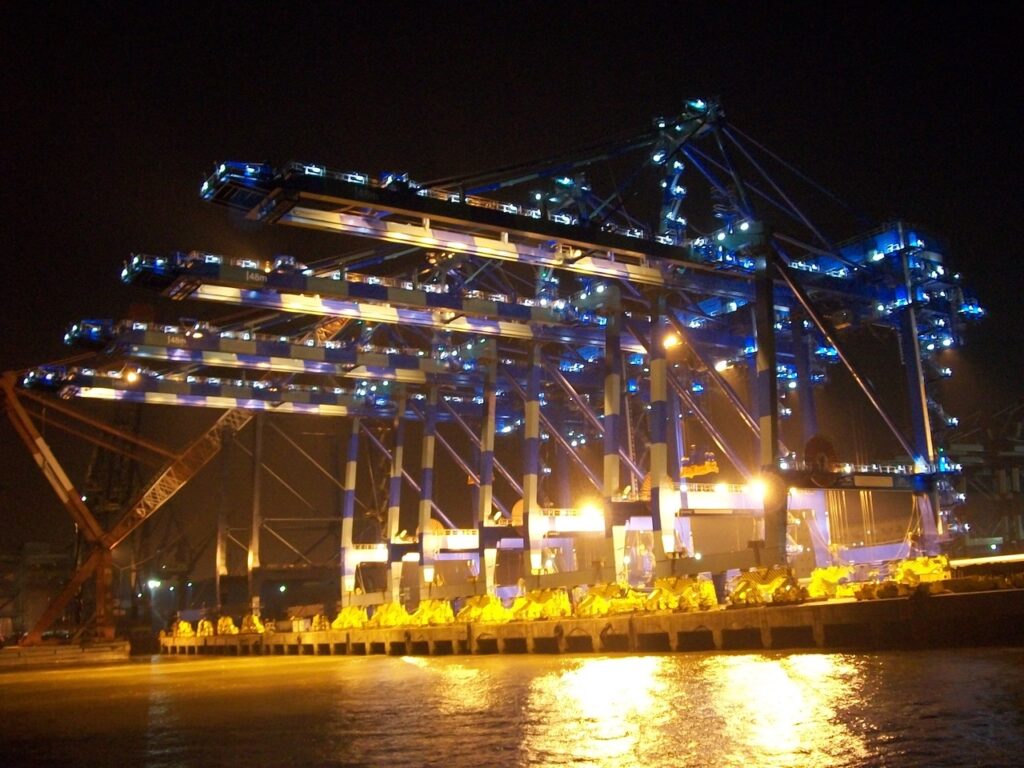 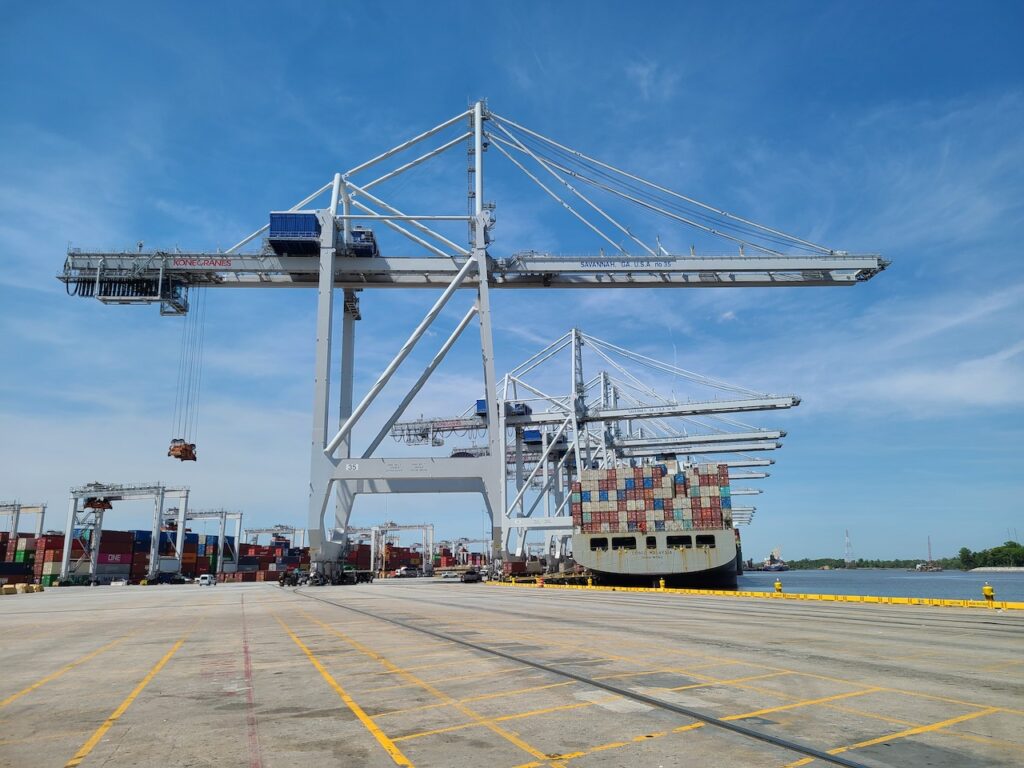 Caption: Cranes being shipped to Georgia Ports Authority (GPA) must pass under the Talmadge Bridge, which prevents large cranes from being shipped fully erect. 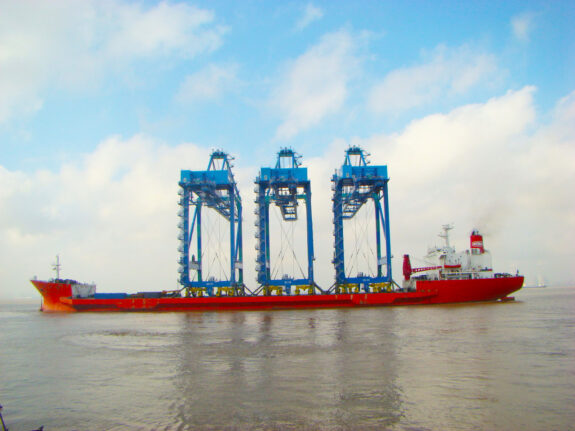 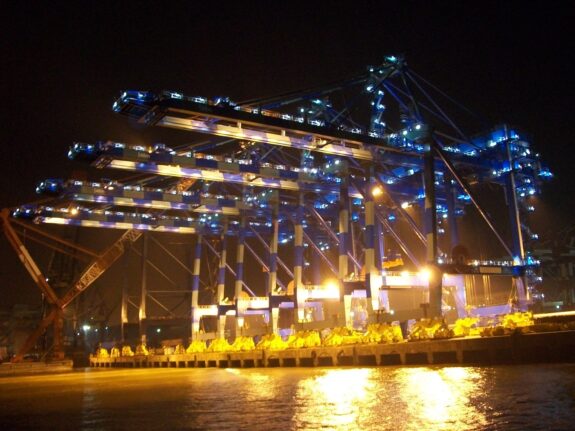 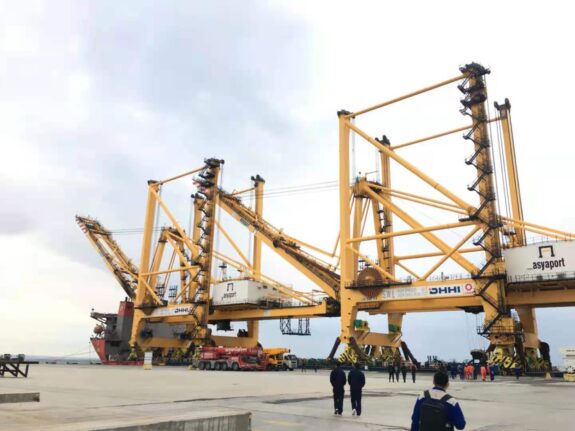 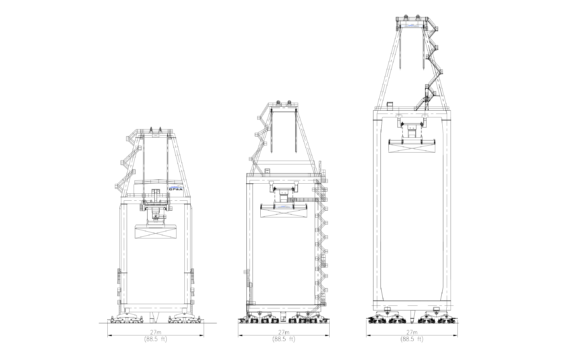 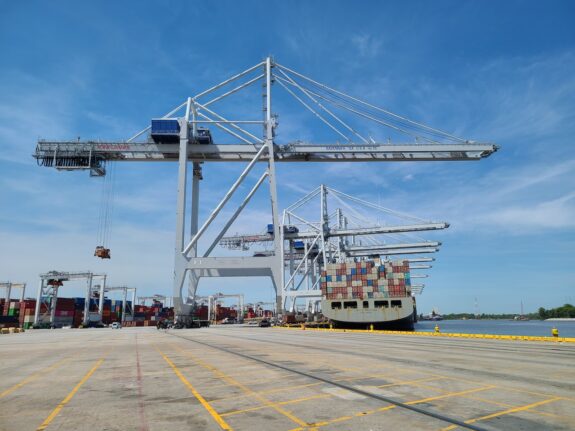