Howard Electrical Limited (HEL) has completed an overhaul of the fourth-floor plantroom at the iconic Hilton Hotel on London’s Park Lane.

While the pandemic hit the hospitality and travel industries hard, the 2020-2021 lockdown in London enabled one of the city’s most famous hotels to replace its major plantroom ahead of a grand reopening on 17 May. Horsham’s HEL was the lead contractor and oversaw one of the most memorable installations in the company’s history.

The fourth-floor plantroom serves the lower 15 floors of the Park Lane Hilton building, which includes the basements, kitchens, restaurants and world-class conference facilities.

Rob Emery, director of engineering, EMEA (Hilton worldwide), says it was the “only ever opportunity” the hotel would have to complete an installation of this scale and put a state-of-the-art, energy-saving plantroom at the heart of the property. Peter Howard, director at HEL, says it was opportune, indeed, having originally consulted on a more routine boiler replacement.

It was at that stage that the Richard Stephens Partnership (RSP), of Edenbridge, was contacted about validation of the existing system and pipework arrangement. Andrew Lee, mechanical engineer at RSP, recalls, “Together with HEL, we reviewed the existing system configuration and analysed flow rate test results. We agreed with HEL that simply replacing the boilers was not an option.”

HEL and RSP presented a solution using computer-aided design (CAD) and building information modelling (BIM) that detailed in a three-dimensional environment, 14 larger boilers that would replace the existing 16 units, served by a new dedicated set of circulation pumps. Most of the pipework required replacement including the introduction of a 300mm low loss header. All of the existing boilers and pipework sections were to be removed sequentially so as to maintain services to the hotel and keep disruptions to a minimum.

Emery says, “I always look to HEL for my heavy-industry, high-risk jobs; they have a track record of proving that it’s worth the investment. It was also a straightforward decision to proceed with the project based on what they presented. It’s been well documented what impact the pandemic had on the hotel industry and as occupancy reduced last spring, it was clear this was a one-off opportunity. You can close down a section of rooms, but you can’t close down back of house to facilitate works; the laundry, for example, must be kept operational. We have to factor these things into every decision we make.”

Despite the hotel shutdown, the scale of the work in what is a relatively compact plantroom still presented logistical and installation challenges. To accommodate the heating capacity, the pipework and pumps were large, while good maintenance access to the new plant and equipment had to be ensured.

Lee says, “The new boilers are far more efficient than the existing ones they replaced. As part of the heating works, a complete new controls installation was undertaken that will enable the new boilers and secondary circuits to be controlled and sequenced in a far more efficient manner. If the works were undertaken during normal working conditions, it would have been much harder as more of the hotel’s heating system and hot water services would have had to be maintained. This would have resulted in more existing boilers having to remain during refurbishment.”

Emery is enthused by the energy savings presented by the new plantroom. He says, “From an energy perspective, we push a lot of heat around the building so I’m hoping we’ll save costs in the long-term. The new plantroom is based on a more holistic approach to how much energy the building uses. However, while we’ve gained modern plantroom equipment and the latest technology in terms of controls, ease of use has been prioritised throughout.”

Peter Howard adds, “The project is an astute investment by Emery and his team. With the old system, they had to heat the building 12 months of the year; even in summer they ran the boilers to push hot water around and compensated by using the chillers. Now, they can turn off the heating and still generate hot water.”

HEL employed a number of other companies on the installation, including Basingstoke’s Oventrop that supplied each and every valve. Milton Keynes-based IO Controls Limited (IOC), meanwhile, provided a Motor Control Centre (MCC) panel. HEL and IOC pre-commissioned the controllers and other field devices. HEL then handed the job over to the incumbent Building Management System (BMS) provider for the facility.

Kyle Rangfield, minor works manager at IOC, said: “The MCC panel here was particularly unique in terms of its monitoring capabilities. For example, there are run and fault lights for each of the 14 boiler modules and there is also a fault light for the thermal links; these would normally be consolidated into a single safety circuit status indicator lamp. There aren’t really any ‘standard’ jobs in the BMS industry, but this was an especially interesting project, not necessarily in terms of scale, but because it is a landmark property.”

Chris Doherty, business manager at Rexel Crawley, says, “It was an interesting job because the whole plantroom was being refitted, which inevitably required great variety of product and engineering expertise. We have partnered with HEL for many years and we again collaborated well with the team on site and the directors. The project went very smoothly; everyone helped deliver to the end client’s satisfaction.”

Rexel is a franchise distributor for Schneider Electric, a manufacturer of process and energy technologies. In this instance, Doherty and his team oversaw provision of the panel board, main switches, power meter, moulded case circuit breakers (MCCB) and associated products for the panel installation.

Doherty adds, “While the panel board itself is not that unusual, the size of the unit is on a more industrial scale and you tend to sell these only a few times a month to installations of this magnitude. The accessories used in the panel are selected for the requirements of the site and, in this respect, it is bespoke to the hotel’s requirements.”

RSP’s Lee says, “We have worked with HEL for around 15 years, delivering a number of services upgrade projects. We have undertaken a large range of projects including hot and cold domestic services installations, replacement of redundant plant, packaged steam installations, boiler installations and complete plantroom reconfigurations / upgrades. During this time we have found HEL to be very professional and exceptionally flexible to operate in a live environment by working in a way that best promotes clients’ operational needs. HEL takes a fair and reasonable approach to costing and offers good value for the client.”

“I served 14 years in the navy before transferring to hotels,” Emery adds. “While much of the equipment in the navy was older compared to this shiny new plantroom, I recognise the professionalism and commitment to a military-standard service and installation. It’s great to feel warmth back in the building as we welcome guests again.” 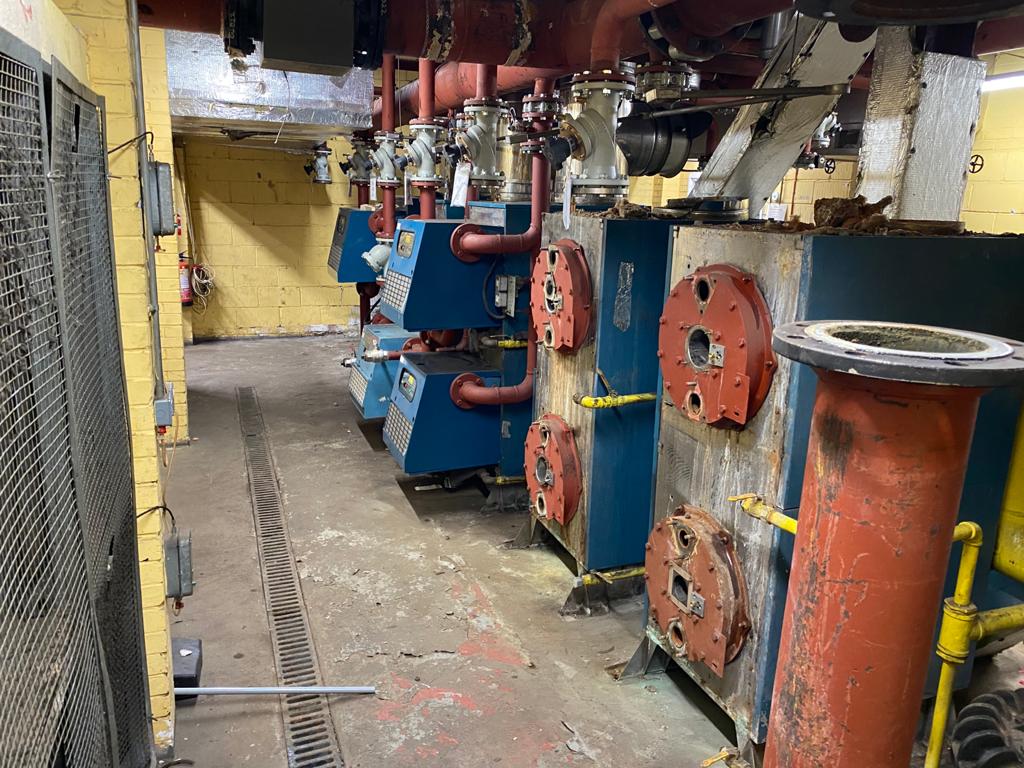 All of the existing boilers and pipework sections were to be removed. 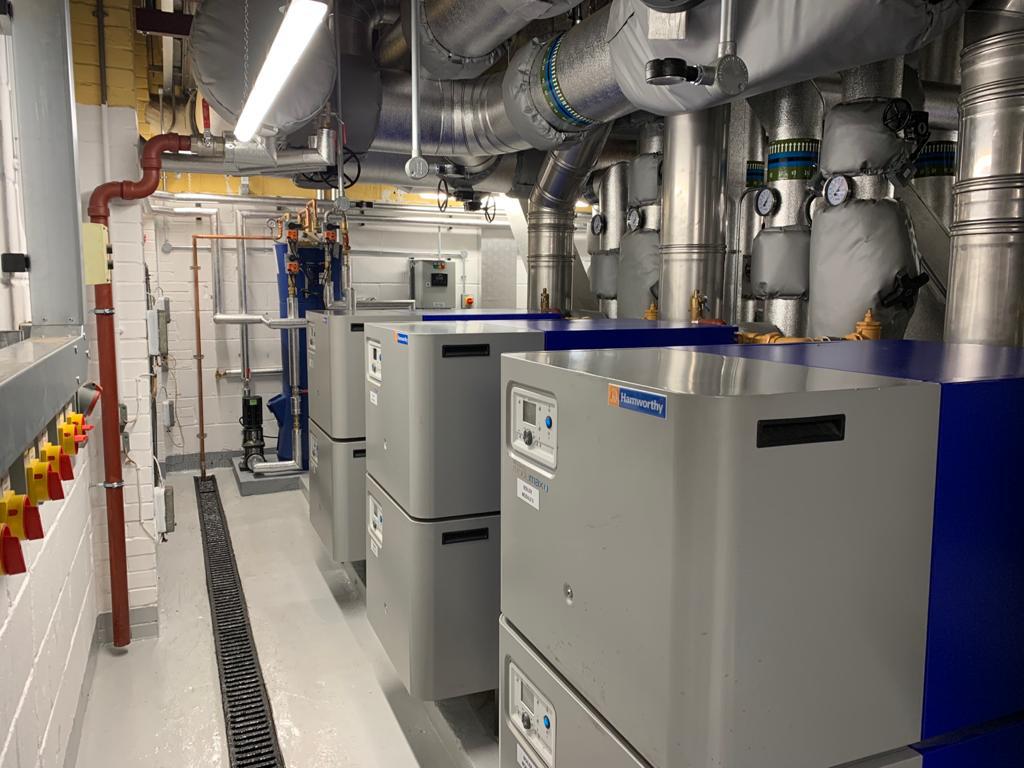 The new plant room is based on a more holistic approach to how much energy the building uses. 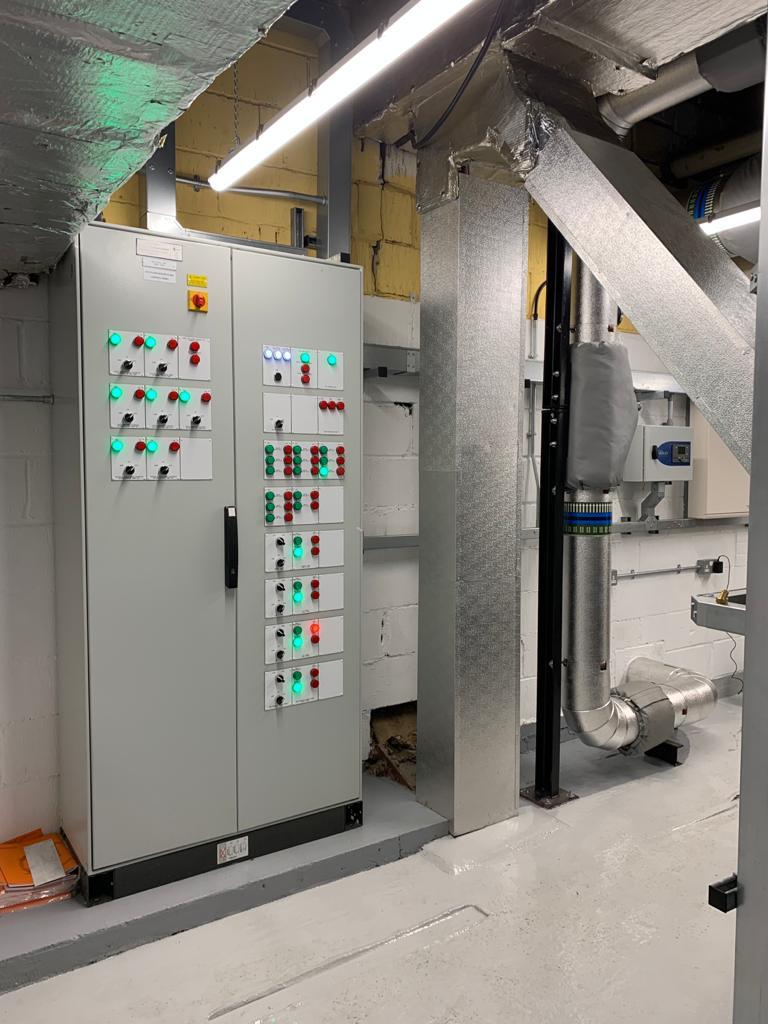 New controls were installed that will enable the new boilers and secondary circuits to be controlled and sequenced more efficiently. 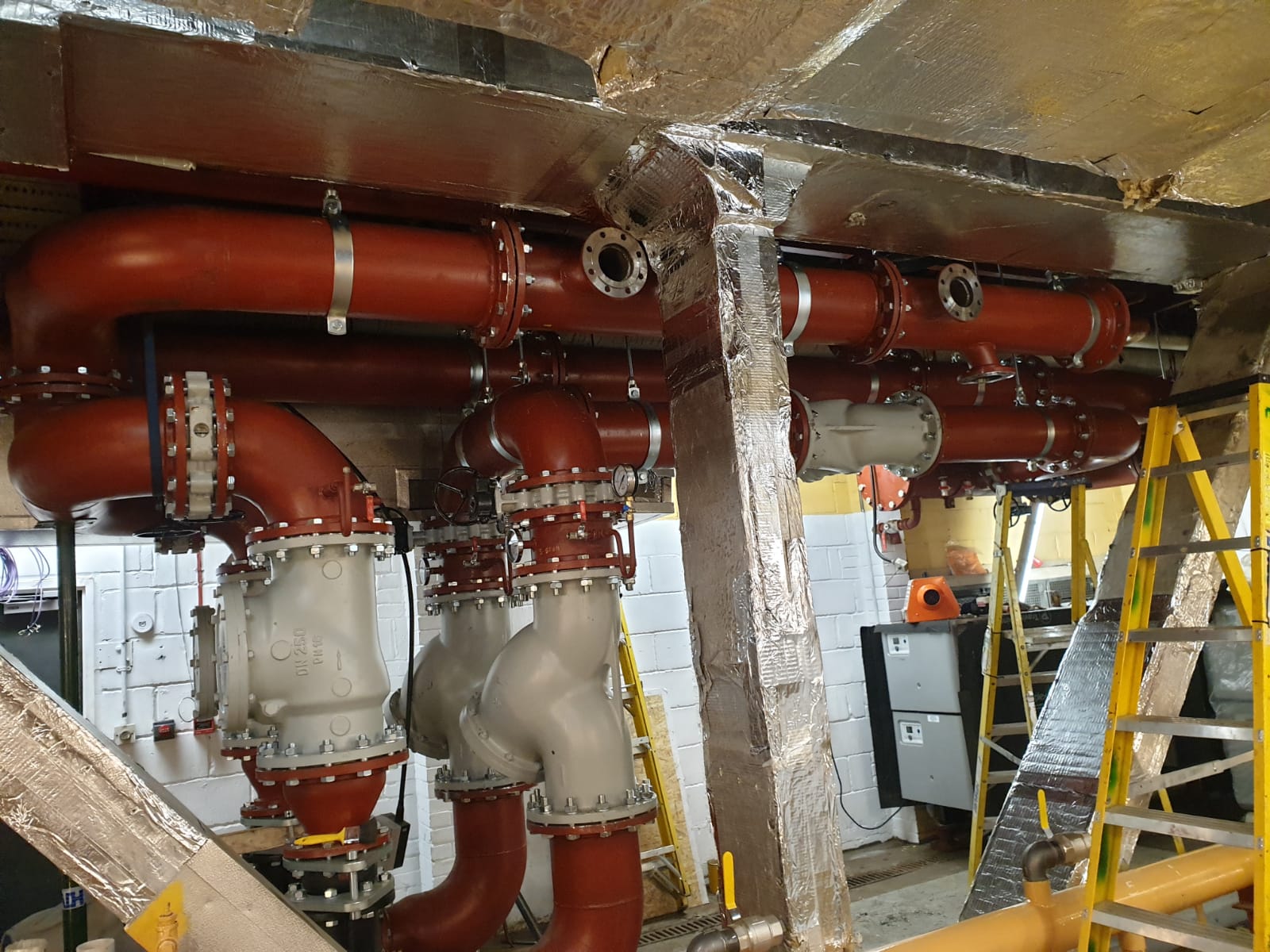 To accommodate the heating capacity, the pipework and pumps are large, while good maintenance access has to be ensured. 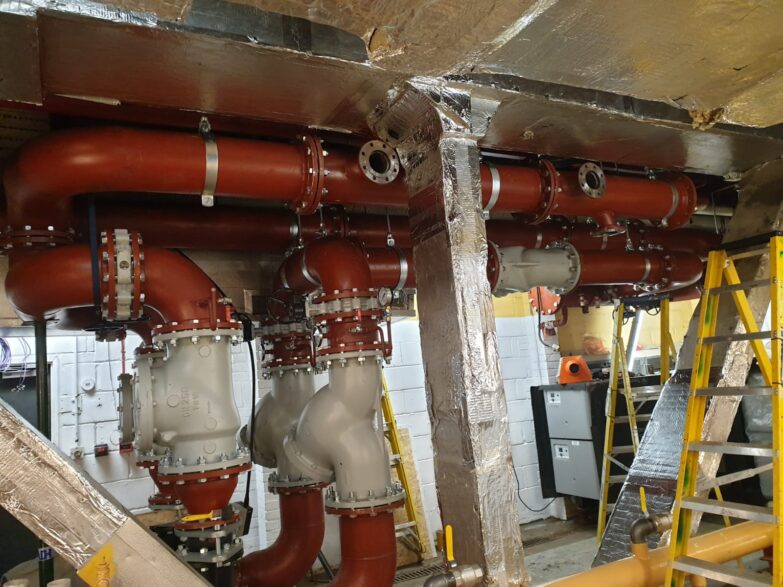 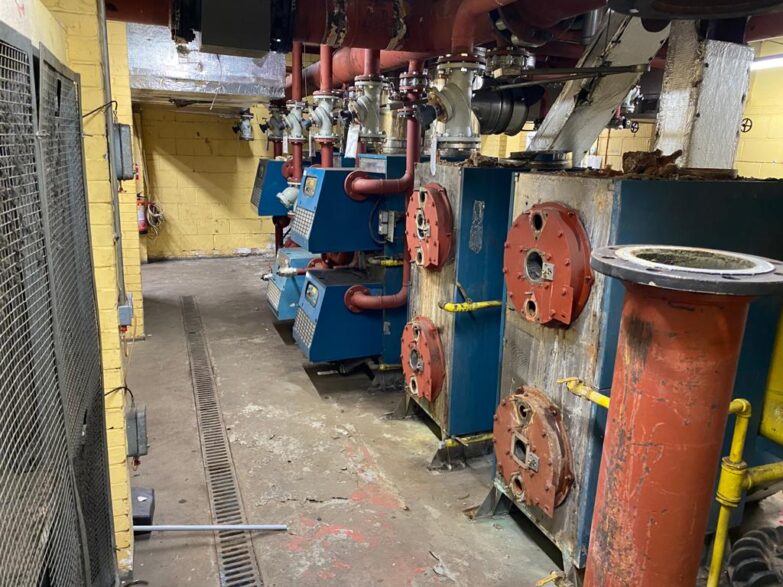 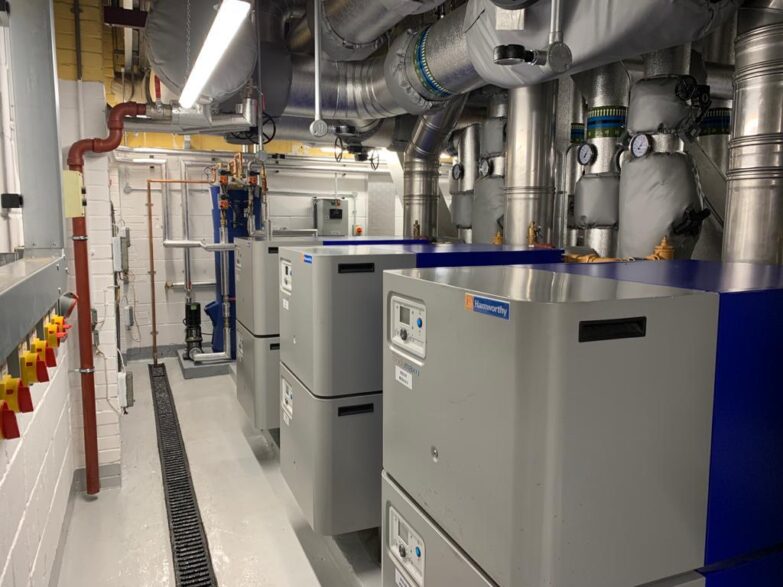