RSS again utilised its Gemmak Engineering business unit to manufacture the 10.2m-long beam, with a self-weight of 420kg, for Efinor, which was recently acquired by fellow French firm Framatome, principally to reinforce the nuclear industry supplier’s industrial welding capabilities. The full scope of work included design analysis and feasibility studies, based on the customer’s concept and parameters. Due to logistical issues and low headroom, a traditional cantilever beam was not an option.

The beam, which features a 1t capacity chain hoist at each end, will be used to give maximum coverage for the installation of equipment plates, floor and wall frames, and ancillary items within an in-containment refuelling water storage tank (IRWST) pool, a cylindrical tank filled with water at atmospheric pressure. The beam will be lifted by a powered hoist, supported from a curved monorail beam installed in the centre of the ceiling above.

The beam also features (pink) bolt-on lifting eyes from RUD Chains Ltd., chosen as aluminium cannot be welded to steel, allowing there to be separation of materials. A counterweight basket, meanwhile, is an integral part of the design to equalise the load. Rigging it (as pictured) with master links was the simplest form of connection to the basket in combination with a four-leg wire rope sling assembly. The fully-assembled beam was recently tested, below-the-hook of a Liebherr mobile crane from R W Christopher Crane Hire, using hand test-weights to counterbalance the beam at different points. Findings were documented on an Excel load-moment spreadsheet.

Matt Permintella, mechanical design engineer at RSS, who oversaw the three-month project from concept to site testing, said: “We used this basket / rigging method based on the client requirements. As the overall mass of the balance beam assembly was very stringent, wire rope slings were the lightest for the application. Mass was further reduced by having several circular cut-outs along the beam web—and aluminium construction, as this is roughly three times lighter than steel. The beam is modular by design due to site access issues, and we supplied it complete in its own storage stillage for transport.”

Jason Govier, who is a lifting engineer at Notus Heavy Lift Solutions, provides lifting and rigging assurance to third-party client, Efinor. RSS, itself a lifting and rigging specialist, has been a chosen partner since formation of Notus Contract Lifting, which is part of the Notus Group of companies, that includes Notus Heavy Lift Solutions and Notus Training.

Govier said: “This beam is a significant feat of engineering—82,000 combinations are possible, based on load to be lifted, lift point position along the beam, counterweight positions along it, and finally equipment / accessories used. We needed something out-of-the-box, with the ability to disconnect counterweight once load had been set down to enable repositioning of the beam above subsequent loads. The wheeled counterweight basket allows operatives to pre-load the required counterweight, then easily manoeuvre into position at the tail end of the beam for connection to equalise the load.”

He added: “I have known and worked with Steve [Hutin, managing director at RSS] for over 20 years—working initially with Dow Performance Silicones and then Sarens, in Finland, where RSS shipped lifelines to the transhipment base for the TCO [Tengizchevroil] project in Kazakhstan, and now Notus. I knew that they had recently acquired a fabrication facility [Gemmak] so decided to give them a try based on previous good support and service. The test and application went perfectly, as anticipated, per design and calculations. Such partnerships are very important to me. It’s not often that can you say that you’ve never been let down, and for that reason alone I will continue to use RSS for the supply, testing, and now manufacture of lifting equipment and accessories.”

Permintella reiterated that the project served as another example of RSS’s expanded engineering capability, having acquired the Gemmak business, located near to de facto headquarters in South Wales, in 2019. RSS has more than doubled Gemmak’s turnover during the last 12 months, principally through the design, manufacture, fabrication, and repair of lifting beams, swing jibs, lifting platforms, pipework, runway beams, and lifting brackets, in addition to providing bespoke equipment for the steel, shipbuilding, petrochemical, and other heavy industries. 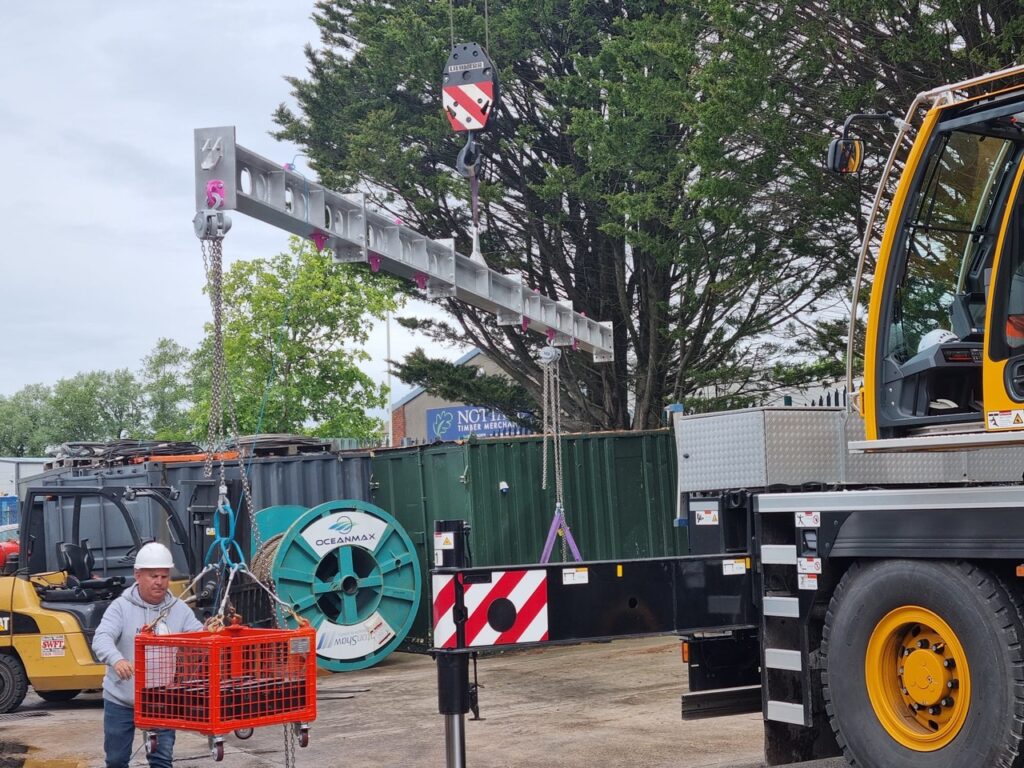 Caption: Rigging it (as pictured) with master links was the simplest form of connection to the basket in combination with a four-leg wire rope sling assembly. 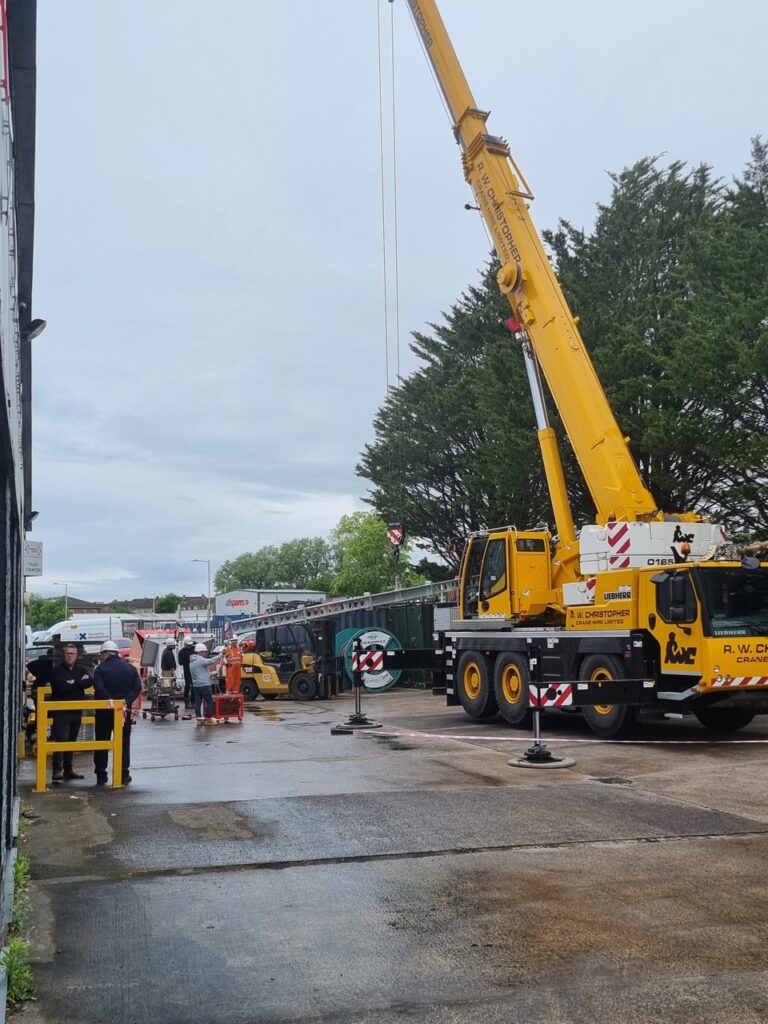 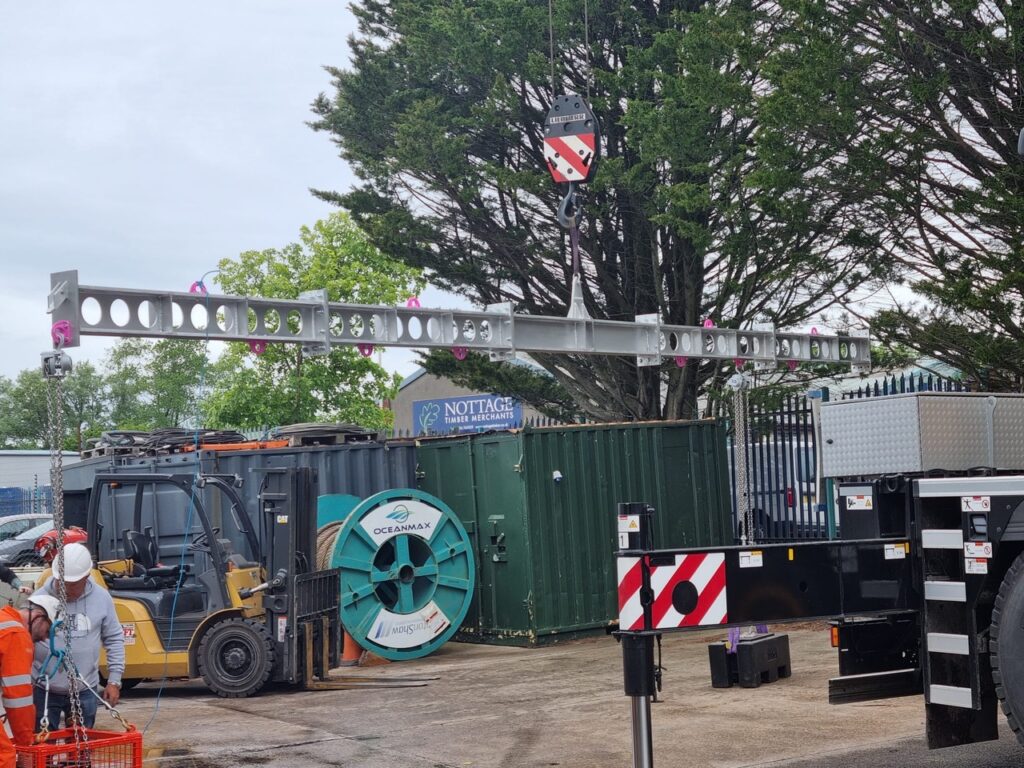 Caption: Mass was further reduced by having several circular cut-outs along the beam web—and aluminium construction. 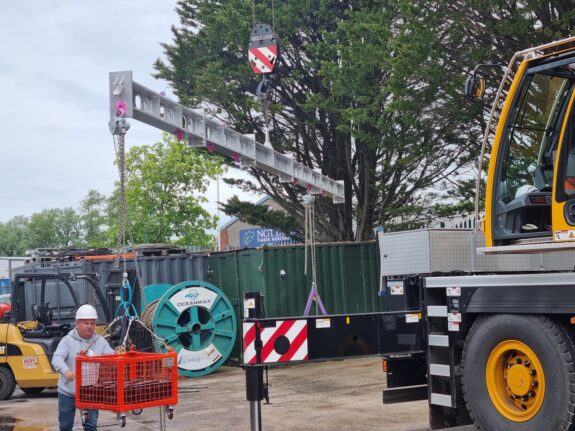 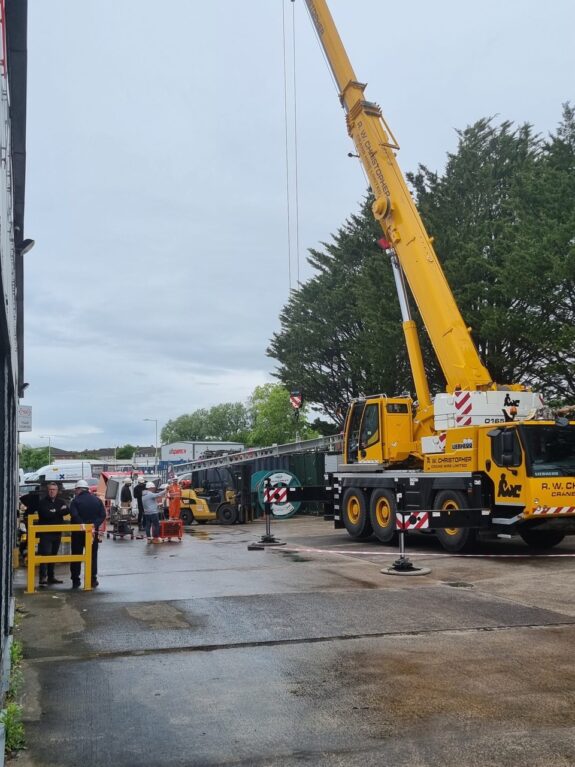 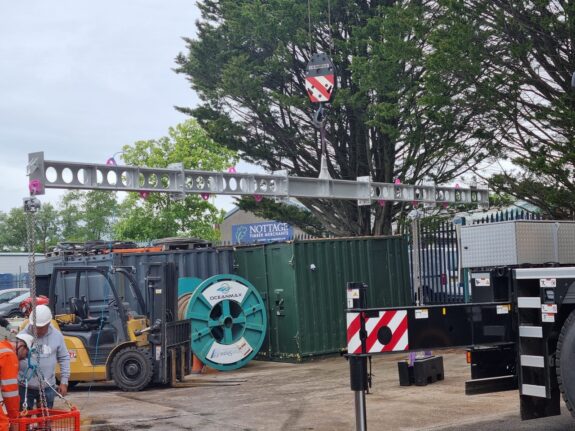